Posted on April 16, 2013 by The Extinction Protocol 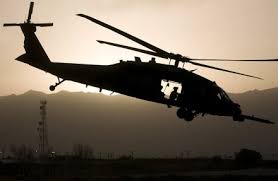 April 16, 2013 – NORTH KOREA – A U.S. military Black Hawk helicopter has crashed near the border with North Korea, according to a South Korean defense official. The helicopter, identified by the Yonhap news agency as a UH-60 Black Hawk, came down in Cheolwon county, a defense ministry spokesman told AFP. The precise cause of the crash was not immediately clear, but the incident occurred during ongoing South Korea-US joint military exercises. Yonhap quoted emergency rescue workers as saying the 12 service personnel on board the helicopter had survived the crash, which comes at a time of heightened military tensions on the Korean peninsula. North Korea has condemned the joint exercises as a rehearsal for invasion, and made a series of threats of military retaliation. There are 28,500 US military personnel permanently stationed in South Korea. –Sky News