Posted on January 15, 2012 by The Extinction Protocol

January 15, 2012 – ANTARTICA – A strong and shallow series of earthquakes have erupted near the remote South Shetland Islands region of Antarctica on Sunday, experts from the U.S. Geological Survey said. The earthquakes in the intense tectonically-activated series measured a 6.6 magnitude, followed by a 6.2 magnitude earthquake and 5.1 and 5.6 aftershocks. The epicenter of the earthquakes was at various depths of from one kilometer (0.62 miles) to 14 km (9.2 miles) below the earth’s surface and some 464 kilometers west of Coronation Island in distance. No destructive tsunami was created, according to the U.S. NOAA warning center. The earthquake series is worrisome because it’s further evidence of what I have been warning about for over the past 6 months, that the Southern hemisphere, particularly around the periphery of Antarctic, is shows increasing signs of seismic destabilization. On January 12, there was a swarm of five moderate earthquakes which erupted south of Africa- the strongest of which was a 5.3 and a 5.5. On January 13, the South Sandwich Islands, north of Antarctica, was hit with a 5.1, and 5.2. On January 14 the region was struck again with a 5.0 earthquake and another 4.9 on January 15th. Not only are earthquakes increasing along the southern polar region but in November of 2011, the Tasmania’s Antarctic Climate and Ecosystem centre found that the South Ocean was storing more heat than any other ocean on the planet. The shape of the earth, a mal-formed spheroid, whose center of gravity is becoming increasing displaced by the turbulent shifting of the planet’s mass due to a wave of strong earthquakes that have rattled the planet over the last 7 years. These large mega-thrust earthquakes are exacting a terrible toll of stress on the planet’s angular momentum. In 2004, the planet suffered a devastating 9.1 mega-thrust earthquake in the Indian Ocean near the Sunda Strait. In February of 2010, Chile was rocked by a 8.8 magnitude earthquake and in March of 2011, Japan was similarly hit with a 9.0 magnitude earthquake and tsunami. In April of 2011, the European satellite Gravity field and steady-state Ocean Circulation Explorer, or GOCE released a detailed map of Earth’s gravity field. (See quakes and mounting stress increasing around South Pole) 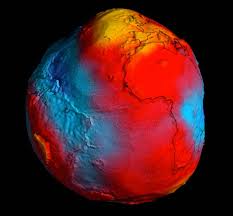 The digital 3-dimensional model shows planet Earth’s dimensional gravity signature is now severely deformed and this is increasing mechanical stresses within the planet’s interior- which will further aggravate thermal gradient. As the planet is generating more energy in rotation to do the same work under greater resistant pressure- it is adding an additional burden to a stressed system that is already in dire need of a catastrophic correction. The fact that Earth has oceans to create tidal budge on its sides and absorb massive earthquake seismic shocks may be the only thing that has saved the planet thus far from shifting over. Earth’s unbalanced model is further compounded by two additional factors. The planet’s magnetic field is degrading from a magnetic polar migration and subsequent reversal and the disproportionate weight of the Antarctica ice-cap has created a wobble or precession in the planet’s spin, which has recently fluctuated according to some scientists. Throw in the planet’s angle of inclination of 23° degrees and you have an unstable system that is bobbling along in space as it spins in tilted and trembling fashion. If any more large earthquakes strike the planet in the near future, her stability will erode further and the dangers of a catastrophic crustal correction becomes more likely, similar to what has already happened on Uranus, which is sitting on its side, and Mercury (with a magnetic field that is already 150 times weaker than Earth’s) whose magnetic field has also slipped and is experiencing an unexplained thermal anomaly at the southern pole. All of these factors are increasing tectonic-plate stresses and earthquake activity on a very dangerous region of the planet that is already tinged by deep submarine volcanism. –The Extinction Protocol