Posted on May 7, 2011 by The Extinction Protocol 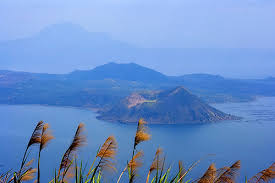 May 7, 2011 – MANILA – After being relatively quiet in past days, restive Taal Volcano in Batangas province showed intensified activity anew, with state volcanologists recording 25 volcanic quakes there in the last 24 hours. In its Saturday update, the Philippine Institute of Volcanology and Seismology (Phivolcs) also noted an increase in water temperature and acidity at the Main Crater Lake. “Taal Volcano’s seismic network recorded 25 volcanic earthquakes during the past 24 hours. Field measurements conducted on 05 May 2011 at the eastern sector inside the Main Crater Lake showed that the water temperature increased from 31.5 to 32.0 degrees Celsius, the water became more acidic with pH value decreasing from 3.09 to 2.94 and the water level further receded to 0.19 meters from the 0.23 meters as compared to the last reading on 19 April 2011,” it said. Carbon dioxide emission as of May 3 and 4 was at 2,057 tons per day (t/d), slightly down from 4,750 t/d last March but higher than the 1,875 t/d last February. Phivolcs said Alert Level 2 remains over Taal Volcano with the interpretation that magma has been intruding towards the surface. It reminded the public the Main Crater, Daang Kastila Trail and Mt. Tabaro are strictly off-limits because sudden hazardous steam-driven explosions may occur and high concentrations of toxic gases may accumulate. “Breathing air with high concentration of toxic gases can be lethal to (humans and) animals and even cause damage to vegetation,” it said. Also, it reminded the public the entire Volcano Island is a Permanent Danger Zone (PDZ), and permanent settlement in the island is strictly not recommended.”  –GMA News