Posted on August 9, 2015 by The Extinction Protocol 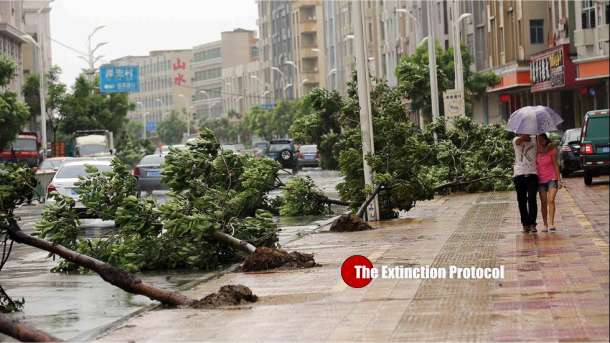 August 2015 – TAIWAN – Typhoon Soudelor battered Taiwan and China on Saturday, killing at least 17, leaving nine missing and causing millions of dollars in damage. Five people were killed while the storm besieged Taiwan, including a mother and daughter swept out to sea, two men killed by falling debris in separate incidents and another man pulled from a mudslide. At least twelve died when the storm caused mudslides and flooding in China. Officials issued a grade-IV emergency, the lowest emergency level, for areas hard-hit by Soudelor in China, Xinhua News Agency reported. Two teams were dispatched to Zhejiang and Fujian provinces to aid those affected by the storm.

Agricultural damage in Taiwan is estimated to cost around $18.9 million, says the Taipei Times. Damage in China has been calculated at $617 million, according to Xinhua News Agency. Taiwan’s Ministry of Education reported academic institutional damage reached $4 million nationwide, Taiwan News reported. At least 812 schools were damaged. At one point during the storm, over 4 million Taipower customers were rendered powerless, a record number of outages previously held by Typhoon Herb, which left 2.79 million powerless in 1996, according to the utility.

The BBC reported an eastern Taitung County resident told Formosa TV, “I’ve never seen such a powerful typhoon in my 60 years.” Local authorities reported at least 12 people were killed when mudslides and flooding swept through Zhejiang Province, China, Saturday night, collapsing several homes, Xinhuan News Agency reported. Another five people are missing. A man was killed in Kaohsiung, Taiwan, after he was struck by a falling tree Saturday afternoon, Taiwan News reported. Another man died when he was struck by a falling billboard in Su’ao Township late Friday night, the report added.

An 8-year-old girl and her mother died when they were swept out to sea by strong waves as the storm neared land, Taiwan’s Central News Agency reported. The girl’s twin sister remains missing along the beach in the northeastern county of Yilan, the report added. Before the storm made landfall in China, more than 1.4 million homes in Fujian province were left without power as strong winds blasted the region, the Associated Press reported. The city of Fuzhou, China, was slammed by heavy rains, leaving over 10,000 trees strewn about the city and stranding vehicles in floodwaters, Xinhua News Agency reported. Authorities ordered the evacuation of more than 163,000 people in southeast China and called 32,000 ships back to port ahead of the storm, the AP added.

Thousands of police and soldiers were on standby to aid those affected by Soudelor. On Saturday afternoon, marine police rescued 55 university students and teachers trapped on a small island where they had been attending a summer camp, after strong gales stopped ferry services, China’s official Xinhua News Agency reported. At least 185 people were injured during the storm in Taiwan. Aside from injuries, residents and others woke to streets in Taipei littered with trees, power lines and other debris. –Weather