Are earthquakes and volcanic eruptions increasing across the planet?

Posted on April 28, 2015 by The Extinction Protocol 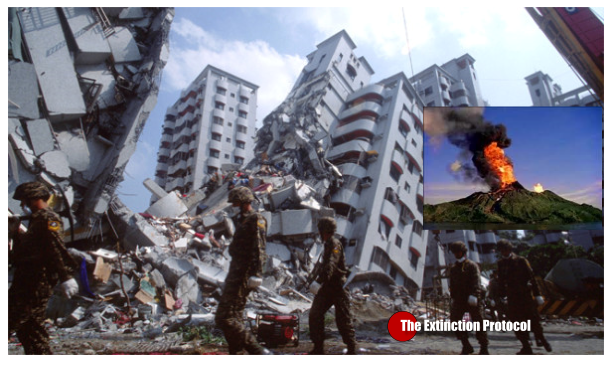 April 2015 – GEOLOGY – If it seems like earthquakes and erupting volcanoes are happening more frequently, that’s because they are. Looking at global magnitude six (M6) or greater from 1980 to 1989 there was an average of 108.5 earthquakes per year, from 2000 to 2009 the planet averaged 160.9 earthquakes per year: that is a 38.9% increase of M6+ earthquakes in recent years. Unrest also seems to be growing among the world’s super-volcanoes. Iceland (which is home to some of the most dangerous volcanoes on the planet), Santorini in Greece, Uturuncu in Bolivia, the Yellowstone and Long Valley calderas in the U.S., Laguna del Maule in Chile, Italy’s Campi Flegrei – almost all of the world’s active super-volcanic systems are now exhibiting some signs of inflation, an early indication that pressure is building in these volcanic systems.

When they will erupt is guess work, but in the meantime, activity is growing in Central America’s volcanoes such as Costa Rica’s Turrialba Volcano, Asia’s volcanoes such as Kamchatka, Alaska and Indonesia are also more active. Magma chambers are growing as pressures increase, the numbers of tremors are increasing as are related ‘quake-clusters’. If any one of these major volcanic systems has a large scale eruption, it would be a global event. Iceland is considered by many scientists to be the next likely place for a global level volcanic event. The last major event, actually relatively minor, was in 2010 when an Icelandic volcano (Eyjafjallajökull volcano) made headlines around the world by spewing mega-tons of ash into the atmosphere, cancelling and re-routing thousands of flights and costing airlines and passengers more than $7 billion+ in lost revenues.

esearch connects the Sun to the Earth in fascinating new ways. A 1967 study published in the Earth and Planetary Science journal, stated: “Solar activity, as indicated by sunspots, radio noise and geomagnetic indices, plays a significant but by no means exclusive role in the triggering of earthquakes.” A 1998 report by a scientist from the Beijing Astronomical Observatory… “Earthquakes occur frequently around the minimum years of solar activity.” As reported on NewScientist.com and numerous other science sites, including Space.com, the sun has recently entered into its lowest (minimum) actively levels in four centuries, coinciding with an increase in global seismic activity. “Solar activity is declining very fast at the moment,” Mike Lockwood, professor of space environmental physics at Reading University, UK, told New Scientist. “We estimate faster than at any time in the last 9300 years.”

Current Solar science looks at Sunspots, Solar Flares (charged particles), Solar Wind speed and density, Magnetic Field Shift, Shifting Ocean and Jet Stream Currents, Extreme Weather (including earthquakes, volcanoes, hurricanes or other extreme natural events), and have concluded that the Earth and the Sun are far more connected than previously thought. The most recent study by the USGS finds there were more than twice as many big earthquakes in the first quarter of 2014 as compared with the average since 1979. “We have recently experienced a period that has had one of the highest rates of great earthquakes ever recorded,” said lead study author Tom Parsons, a geophysicist with the U.S. Geological Survey (USGS) in California. It seems that earthquakes and volcanic activity is on the rise and according to many scientific experts we can expect more in the near future. –The Costa Rica News

22 Responses to Are earthquakes and volcanic eruptions increasing across the planet?