Posted on April 20, 2013 by The Extinction Protocol 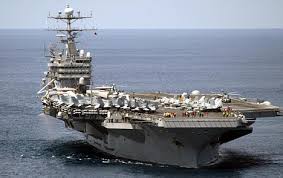 April 20, 2013 – CHINA – The Chinese military has deployed its new anti-ship ballistic missile along its southern coast facing Taiwan, the Pentagon’s top military intelligence officer said today. The missile, designated the DF-21D, is one of a “growing number of conventionally armed” new weapons China is deploying to the region, adding to more than 1,200 short-range missiles opposite the island democracy, U.S. Army Lieutenant General Michael Flynn, the Defense Intelligence Agency director, said in a statement to the Senate Armed Services Committee. Flynn’s reference to the DF-21D follows one made by U.S. Navy Admiral Samuel Locklear, head of the U.S. Pacific Command, in congressional testimony on April 9. He highlighted the “initial deployment of a new anti-ship missile that we believe is designed to target U.S. aircraft carriers.” Flynn’s brief reference to the DF-21D today is significant because it advances the DIA’s assessment last year, when U.S. Army Lieutenant General Ronald Burgess, then the agency’s director, said China’s military is “probably preparing to deploy” the weapon. The disclosure may spark increased scrutiny in Congress this year about the vulnerability of the Navy’s aircraft carriers, including the new Gerald R. Ford class being built by Newport News, Virginia-based Huntington Ingalls Industries Inc. The Navy estimates that the first new carrier will cost at least $12.3 billion, and the service’s budget request for the fiscal year beginning Oct. 1 includes $1.68 billion for new aircraft carriers, more than double this year’s $781.7 million request. Of that, $945 million would pay for continued design and construction of the second Ford-class carrier, the USS John F. Kennedy. Michael Gilmore, the Pentagon’s director of operational testing, warned in his January 2012 annual report that the Navy lacked a target needed to check its defenses against the DF-21D. The Navy had an “immediate need” for a test missile able to replicate the DF-21D’s trajectory, Gilmore said. Last July, Gilmore told Navy Secretary Ray Mabus in a memo that testing to evaluate the new carriers’ “ability to withstand shock and survive in combat” would be postponed until after the Kennedy is built, and may not be completed for seven years. The DF-21D is intended to give China “the capability to attack large ships, particularly aircraft carriers, in the western Pacific,” the Pentagon’s 2012 China report said. The report cites estimates that the missile’s range exceeds 930 miles (1,500 kilometers). The missiles are designed be launched to a general location, where their guidance systems take over and spot carriers to attack with warheads intended to destroy the ships’ flight decks, launch catapults and control towers. U.S. Chief of Naval Operations Admiral Jonathan Greenert told defense reporters in March 2012 that the Navy is evaluating how to defeat the missile during all phases of flight, using methods such as jamming the missiles’ sensors, reducing the electronic emissions from U.S. ships, and intercepting the missile. “Some call that links of a chain,” Greenert said. “You want to break as many links as possible.” In its fiscal 2014 Budget Highlights book, the Navy said it’s working a “kill chain” against an unspecified weapon. The Navy, the book says, wants to integrate the capabilities of the Falls Church, Virginia-based Northrop Grumman Corp.’s (NOC) E-2D Advanced Hawkeye surveillance aircraft; Bethesda, Maryland-based Lockheed Martin Corp.’s (LMT) Aegis surveillance and missile defense system; and Waltham, Massachusetts-based Raytheon Co.’s (RTN) Cooperative Engagement Capability sensor network linking ships and Standard Missile-6 interceptors “to keep pace with the evolving threat.” –Bloomberg

Book Quote: “The (Chineses) Dong Feng 21 missile is effectively meant to keep the U.S. naval fleet out of the East China Sea and prevent the U.S. Navy from intervening in a Chinese strike against the Taiwanese island. The U.S. is developing its own hypersonic cruise missile, the X-51, but at present; there are no known effective countermeasures that could knock the hypersonic Chinese Dong Feng 21 out of the sky. In the future, American ships may be equipped with the only known effective defense against such hypersonic missile threats- laser canons.” -The Extinction Protocol, pp. 50-51, 2009