Posted on June 30, 2012 by The Extinction Protocol 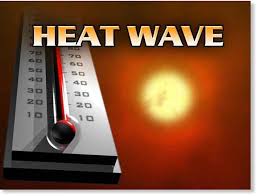 June 30, 2012 – CLIMATE – Norton Dam, Kan., hit 118 F (48 C) on Thursday, and 32 communities from Colorado to Indiana just posted their highest temperatures ever. Forecasters say back-to-back La Niñas are partly to blame. These records appear to be falling into step with a longer-term trend in which record highs are being set more often than record lows for each decade since the 1970s – a trend many climate researchers have attributed to global warming. As June 2012 draws to a close, it feels more like mid-July or August to people in wide swaths of the country. Between June 27 and June 28, 32 communities stretching from Colorado to Indiana posted the highest temperatures on record ever for their locations – with a handful tying or topping records set only a few days before, according to data kept by the National Climatic Data Center in Asheville, N.C. Norton Dam, Kan., for instance, recorded an all-time record of 118 degrees F. on Thursday, two degrees above Death Valley’s July average. The 118-degree reading shattered Norton Dam’s previous record of 113 degrees F. – set just three days before. More than 350 sites across a broad swath of the continent’s interior have posted daily record highs since June 27, with heat advisories on Friday covering all or parts of 23 states from Kansas east to the Carolinas and into the Northeast, and from Wisconsin south to Mississippi and Alabama. At the same time, other parts of the country are reporting record lows for this time of year. Anyone looking for relief might put the Northwest on their itinerary. Over 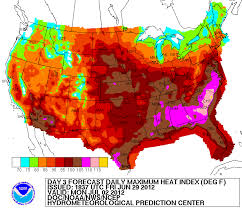 the same two-day period, 57 locations, largely clustered in Washington state and northeastern Oregon, posted at least one daily high temperature that tied or beat the lowest for the date on which it was measured. Waterville, Wash., posted the biggest drop among the group – a high of 51 degrees on Wednesday, nine degrees below the previous record-low high of 60 degrees on June 27, 1946. And it’s all coming out of a spring that was the warmest on record in the US, bringing a heat wave to the center of the country in March the likes of which the US hasn’t seen since 1910. Indeed, Spring 2012 in the US was 2 degrees warmer than the previous record-holder, the spring of 1910. One reason for the seemingly relentless high temperatures is the presence of a broad ridge of high pressure inching its way across the continent, forecasters say. With skies generally clear, sunlight has a clear path to travel on its way to baking what in many places is an already parched surface. As of Tuesday, a broad swath of the US was experiencing either severe or extreme drought, according to the National Drought Mitigation Center, based at the University of Nebraska in Lincoln. –CSM

37 Responses to Temperatures in Kansas hit 118 F: 32 communities from Colorado to Indiana post highest temperatures ever