Posted on August 19, 2015 by The Extinction Protocol 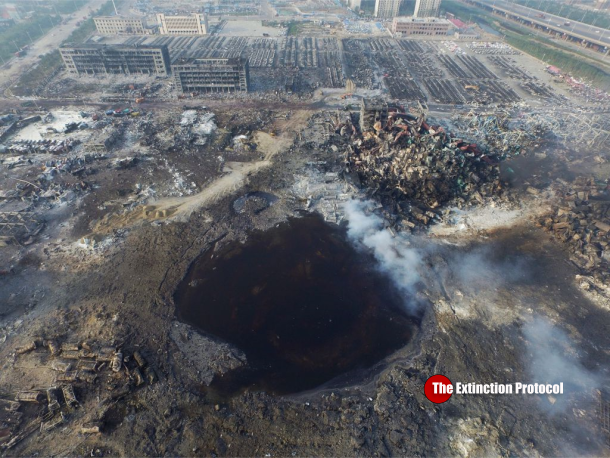 August 2015 – CHINA – Heavy rain fell Tuesday on the remains of a Chinese industrial site devastated by giant explosions, complicating clean-up efforts and heightening fears about toxic contamination as ceremonies were held to mark the disaster’s 114 deaths. Around 700 tons of highly toxic sodium cyanide were at the site in the northern port of Tianjin, officials say, and water could spread it more widely. Rainwater could also disperse chemical residues on the ground into the air when it evaporates, and some of the many substances on the scene could react with it. Amid public anger over the disaster more details about the site operator were reported and a senior work safety official was put under investigation. Officials have insisted the city’s air and water are safe, but locals and victims’ relatives have voiced skepticism, while international environment group Greenpeace has also urged transparency. “I’m worried because we don’t know what’s in the rain,” said a taxi driver as he made his way through the morning deluge. “It could be full of poison.”

Out of 40 water testing points, eight showed excess levels of cyanide on Monday, all within a cordoned-off area surrounding the site of the blasts. The highest reading was 28.4 times official standards, said Bao Jingling, chief engineer at the Tianjin environmental protection bureau. The chemical had been detected at another 21 points and cyanide traces were detected at four other seawater testing points, he added. Authorities have built a dam of sand and earth around the blasts’ central 100,000-square-metre (120,000-square-yard) “core area” to prevent pollutant leakage, Bao said, and drained water from pits and pipelines to make space for the rain. Sodium cyanide, which has a variety of industrial uses including gold mining, is a toxic white crystal or powder. It can release hydrogen cyanide gas, used in gas chamber executions in the U.S. Acute exposure at lower concentrations can cause weakness, nausea and eye and skin irritation while chronic exposure can affect the cardiovascular and central nervous systems, according to the U.S. Environmental Protection Agency.

“We are paying high attention to the rain forecast for the coming couple of days,” Bao told reporters. “We are making plans for the treatment of tens of thousands of tons of polluted water in the pit in the core area.” The air would be “closely monitored” at 18 testing points, and if excessive levels of cyanide or organic compounds were detected the public would be alerted promptly, he promised. But residents are skeptical. “How can we say that the environment is clear?” asked Chen Xingyao, who lived near the blast site and was protesting outside the hotel where the press conference was being held, to demand government compensation for her ruined apartment. “Also, if only the government will test the environment, nobody can know whether it’s good or not.” Amid public anger over the blast and the handling of the aftermath, Chinese media — which are effectively controlled by the authorities — have pointed blame squarely at local officials and the company involved, rather than at any systemic failings in the Communist-ruled country.

The warehouse owner, Ruihai International Logistics, had a license to handle dangerous chemicals at the time of the blast, but there were questions about its certificates and it had previously operated without one, the official Xinhua news agency reported. A total of 10 executives from the firm, including its chief executive, have been detained by police, reports said. The head of China’s national work safety watchdog, Yang Dongliang — a former vice mayor of Tianjin — has been put under investigation for “suspected severe violation of discipline and the law,” the Communist party’s internal anti-graft watchdog said without giving details. The phrase is normally a euphemism for corruption. According to state broadcaster CCTV, a senior fire brigade official said there had been a total of 3,000 tons of dangerous chemicals on the site, in 40 different categories. –Economic Times of India 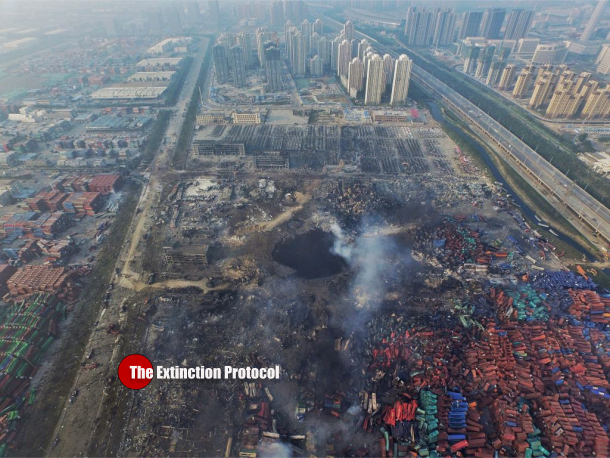