Posted on March 22, 2015 by The Extinction Protocol 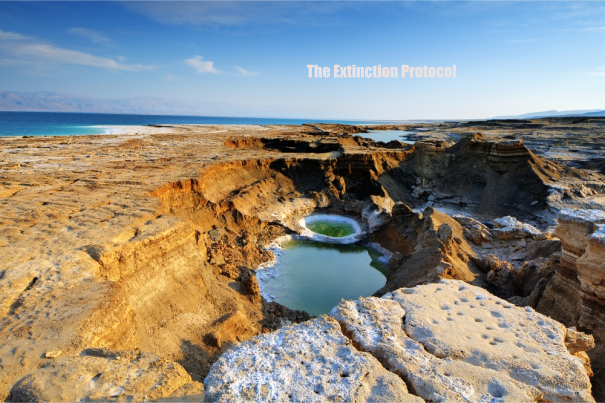 March 2015 – DEAD SEA – There are more than 3,000 sinkholes on the banks of the Dead Sea — and they’re multiplying exponentially, according to environmentalists, as the body of water dries up. “It’s nature’s revenge,” said Gidon Bromberg, the Israeli Director at EcoPeace Middle East, an organization that brings together Jordanian, Palestinian and Israeli environmentalists to protect their shared environmental heritage. “These sinkholes are a direct result of the inappropriate mismanagement of water resources in the region.” More than 1,400 feet below sea level, the Dead Sea is the lowest point on land. The first sinkhole was spotted in the 1980s. By 1990, there were 40, and 15 years later new chasms are breaking open every day.

“They could develop overnight. Or over time,” Bromberg said. “Making them unpredictable. And very dangerous.” With salinity levels ten times that of the Atlantic Ocean, the Dead Sea is evaporating at a rate of nearly four feet per year and large salt pockets are left behind as the water recedes. As ground water dissolves the salt, washing it back into the Dead Sea, empty cavities develop creating massive sink holes. Bromberg explained that sinkholes develop in clusters, collapsing into each other and creating even larger craters. “The big fear is that overnight, the road will collapse,” Bromberg said of Route 90, which runs along the Dead Sea. A portion of Route 90 was closed for repairs this week after parts of the road sank some two inches. Bromberg said the only way to halt the opening of these chasms is to “stabilize” the Dead Sea. The Dead Sea relies on the fresh water of the Jordan River — but only about 5 percent of the historic flow is currently flowing into the Dead Sea. Bromberg’s organization argues that 30 percent of the historic flow would at least be a step in the right direction. “If nothing is done, it’s only a matter of time until someone dies,” he said. –ABC News