Posted on June 7, 2014 by The Extinction Protocol

June 2014 – INDIA – A “volcano-like eruption” in Kangra district in Himachal Pradesh triggered panic among the people of the area. Reports said that flames and a hot liquid stream were seen spewing out of a hill 100 m from Gadiyada village. The village is over 200 km from Shimla. State geologists confirmed that the eruption is a ‘small magmatic activity.’ After the report, a team of Geological Survey of India (GSI) reached the site on Thursday. Fearing that a bigger eruption could damage their agricultural land and houses, residents of around half a dozen villages in the vicinity of the eruption are anxiously awaiting the final report of GSI team. “Gases and liquids are being emitted from holes in a 10 feet area around the hill where the volcanic activity took place,” said Ved Prakash, president of Drang panchayat. He said the eruption, unheard of in this area, caused panic among villagers. This is the first time such a volcanic activity has been witnessed in the state. Chief parliamentary secretary Jagjivan Pal in whose Sulah assembly constituency the area falls visited the spot on Tuesday. He said the flames and the hot liquid emanating from the hill had created panic. “Underground temperature in the area has increased manifold and people say that a steel electricity pole had become red hot a couple of days back,” he added. Pal said a sulphur-like material and black stone is flowing out from the perimeter of the hill. –CANINDIA 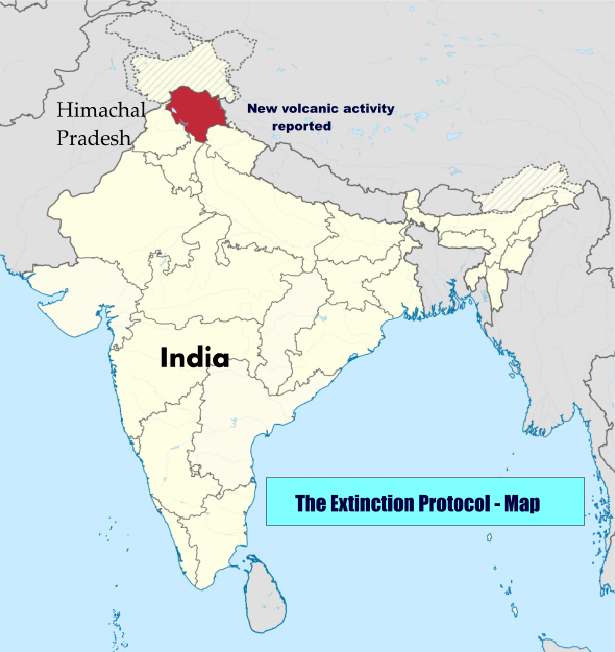