Earth in crisis: Is the planet on the verge of a ‘meltdown’?

Posted on January 5, 2013 by The Extinction Protocol

January 5, 2013 – PLANET – Conditions on the planet continue to deteriorate, particularly in respect to more pronounced climate extremes seen across hemispheres, and the number of volcanoes that are now continuously erupting. The planet is undergoing dynamic change, whereby we’re seeing early evidence that the physical dynamics of the planet is moving towards a spectrum of greater instability. This is happening, as the planet’s magnetic field continues to abate in strength. This is suggestive that we’ve passed the rubicon in this internal process of a geological shift that has been brought on by an anomalistic fluctuation of thermal gradient in the planet’s outer core. Consequently, change is now uniform, and thes 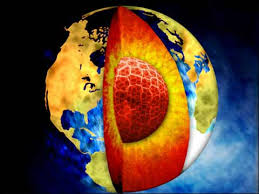 e Earthchanges can now generate events which will affect the entire planet. We had a 4.6 magnitude earthquake in Falcon, Venezuela on January 4, 2013 and that earthquake was immediately followed by a 4.3 earthquake in the Ceram Sea and a 4.9 in Halmahera, Indonesia. Both points on the globe are on exact opposite ends of the planet. We call it an antipodal tangent. On January 5, we had a 5.1 magnitude earthquake on the Mid-Indian Ridge and that was followed approximately 4.5 hours later by an earthquake near the antipodal point of the Cascadian fault with a 7.5 magnitude earthquake in southeastern Alaska. What this means is the entire planet is now starting to resonate from this heightened state of seismicity. The Bible prophesized in Isaiah 24:20 there would come a time, in the very near future, where the Earth would be reeling to and fro or back and forth like a drunkard. This is a state of resonate seismicity resulting from the impact of very large cluster earthquakes or what we refer to in geology as an earthquake storm.

Breaking bad: In April of 2012, a leading earthquake scientist warned in the Croatian Times that the planet could be cracking up after a series of massive quakes in just 48 hours. Expert Gheorghe Marmureanu – from Romania’s National Institute of Earth Physics – says 39 quakes hit the globe within two days in April. The series started with two massive quakes in Indonesia measuring 8.6 and 8.2 on the Richter scale, rapidly followed by three more only slightly smaller in Mexico within hours. “There is no doubt that something is seriously wrong. There have been too many strong earthquakes,” said Marmureanu. He added: “The quakes are a surprise that cannot be easily explained by current scientific knowledge. With the Indonesian quake for example, statistically, there should be one big earthquake in this part of Asia every 500 years. However, since 2004, there were already three quakes with a magnitude of over 8, which is not normal.” In September of 2012, scientists said the Indo-Australian plate near Indonesia was in the early stages of breaking in pieces. 1

Moral degeneracy:  And it’s not just a physical crisis the planet is suffering from. Civilization, as a whole, appears to be on the verge of unraveling. We saw the increase in violence, rise in ethnic strife, and moral degeneracy that plagued Rome before the empire began to unravel. A near endless bloody civil war continues in Syria that has claimed nearly 60,000 human lives. Economic hardships, high unemployment, austerity measures, and crushing debt loads plague many countries, including the world’s three largest economies: the U.S., China, and Japan. Mass shooting incidents appear to be on the rise in the U.S. Violence has become pandemic in many regions of the world from China to Brazil, even as gun sales continue to set records in the U.S. Just this week, a sergeant in Saudi Arabia’s Air Force was jailed in Las Vegas on charges that he pulled a boy into a hotel room and sexually assaulted him the morning of Sin City’s big New Year’s Eve fireworks extravaganza. Mazen Alotaibi, 23, faces charges including kidnapping, sexual assault with a minor and felony.2 Gang rapes and violence against women occur frequency across India, Afghanistan, and many regions of Africa, where women have very little or almost no rights in male-dominated societies. Some of the cases coming out of India speak of unmitigated horrors. The suffering of a university student and her male friend who were brutally attacked aboard a bus in India’s capital did not end after the woman was gang-raped and both were savagely beaten for 2 1/2 hours on December 16, 2012 in New Delhi. Dumped naked on a roadside, the pair encountered shocking apathy as passersby offered only cursory looks and police debated jurisdiction for 30 minutes before taking them to a hospital, where the man received no treatment as he sat without clothes on the floor for hours, the friend recounted in a television interview. If you think that was an isolated incident, consider the fact that 25 cases of assualt were reported across India during the week of the New Delhi incident.3

57 Responses to Earth in crisis: Is the planet on the verge of a ‘meltdown’?