Posted on October 14, 2012 by The Extinction Protocol 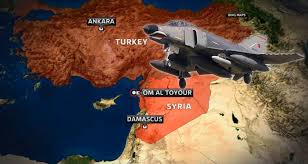 October 14, 2012 – TURKEY – Turkish civilian planes are no longer allowed to fly over Syria, Damascus has said, amid growing tensions between the two neighboring countries. The ban took effect at midnight (2100GMT) on Saturday. This comes just days after Turkey intercepted a Syrian-bound plane, claiming it carried Russian-made munitions for the Syrian army. Syria has described the claim as a lie, challenging Ankara to put the seized goods on public view. The Syrian foreign ministry said its ban on Turkish flights was in retaliation for a similar move from Ankara. Turkey has not announced such a measure, although it has said it will continue to ground Syrian civilian planes it suspects are carrying military cargo. Tensions have been recently rising between the two countries after a series of cross-border incidents. Last week, there were several days of firing across the border after five Turkish civilians were killed by Syrian shelling. Turkey’s government has backed the Syrian opposition and called for the resignation of President Bashar al-Assad. In Syria itself, there were reports on Saturday that rebels had shot down a Syrian military jet outside Aleppo – the town at the centre of recent fighting. Footage posted online showed the burning wreckage of what appeared to be an aircraft, but the claim has not been independently verified. Meanwhile, Human Rights Watch has accused the government of President Assad of dropping cluster bombs – which are banned by more than 100 countries – into populated areas. The group said there was a number of credible reports that the number of cluster bomb strikes had increased dramatically in recent days. Syria refuses to join the Convention on Cluster Munitions, which bans the use of such weapons. In a separate development, Turkish Prime Minister Recep Tayip Erdogan told a conference in Istanbul that the UN’s failure to act in Syria gave President Assad the green light to kill tens or hundreds of people every day. Turkey may not be at war with Syria, but it is now increasingly involved in its neighbor’s conflict, the BBC’s James Reynolds in Turkey reports. Mr Erdogan’s comments come as the UN-Arab League envoy for Syria, Lakhdar Brahimi, had talks in Istanbul with Turkish Foreign Minister Ahmet Davutoglu to hear Ankara’s perspective on the crisis. –BBC 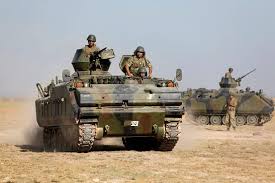 Turkey threatens to move tanks into Syria: One more wrong move from Syria will be one too many. Meeting with the United Nations-Arab League envoy for Syria on Saturday, Turkey’s government announced plans to strike back if its border is crossed again, while Turkish tanks headed toward the Syrian hills. “We will do what’s necessary,” said Turkish Foreign Minister Ahmet Davutoglu. The fighting between the two countries—which erupted when a Syrian shell killed five in Turkey last week—escalated earlier this week when Turkey intercepted a Syrian-bound plane amid reports that they were carrying Russian-made defense equipment. As Syria’s bloody civil war rages into its 20th month, Turkey’s prime minister attacked the U.N. for its failure to intervene “despite all our efforts.” –Daily Beast