Iran says it can hit U.S. interest anywhere – Syria is the first domino to WWIII

Posted on February 8, 2012 by The Extinction Protocol

February 8, 2012 – TEHRAN – Iran is capable of carrying out military strikes on U.S. interests all around the world if the Islamic Republic is attacked by the United States, Iran’s ambassador to Moscow said on Wednesday. The United States has tried to force Tehran to scrap sensitive nuclear work by imposing sanctions targeting Iran’s central bank and giving U.S. banks new powers to freeze Iranian government assets. Iran’s ambassador to Moscow said that the United States would be making a serious mistake, akin to suicide, if it risked a military strike on OPEC’s No. 2 oil exporter. Washington has announced no such plans, but has said a military option is always on the table if Iran cannot be otherwise prevented from developing atomic weapons. “The Americans know what kind of country Iran is. They are well aware of our people’s unity,” Iranian ambassador Seyed Mahmoud-Reza Sajjadi told a news conference in Moscow. And that’s why Iran is fully able to deliver retaliatory strikes on the United States anywhere in the world,” he said, speaking through an interpreter. “Even if it attacks, we have a list of counter actions. (The United States) would be disappointed with their huge mistake.” Iran has increasingly issued threatening statements against the West in recent weeks as tension has increased over its uranium enrichment program, which it moved last month to a mountain bunker better protected from possible air strikes. Iran says its nuclear program is peaceful while Western powers fear Tehran is trying to build a nuclear bomb. “The issue of a military attack from America on the Islamic Republic of Iran has been on the agenda for several years,” said Sajjadi, adding that Iran would never strike first. –Yahoo News 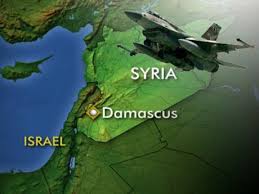 Russia heavily involved in Syrian oppression: Russia used its satellites to help the Syrian government fight growing insurgency in the country, pan-Arab daily Asharq Al-Awsat reported. Russian officials provided the regime of President Bashar al-Assad with satellite photos showing the location of the bases and main forces of the Free Syrian Army, the most prominent militant rebel group, the London-based newspaper said on Wednesday. Foreign Minister Sergei Lavrov traveled to Damascus for talks with al-Assad on Tuesday. He was accompanied by Mikhail Fradkov, head of Russia’s Foreign Intelligence Service, who allegedly handed over the maps to Syrian government, the report said. Asharq Al-Awsat cited unidentified sources in al-Assad’s government, but also said the information “was not fully confirmed.” Neither Foreign Ministry in Moscow nor Fradkov’s agency commented on the story as of Wednesday afternoon. Free Syrian Army emerged as the main organized force combating al-Assad’s government in the bloody uprising in Syria that claimed at least 5,000 lives since March 2011. The group is allegedly comprised primarily of army defectors and reported its ranks to be 20,000. Russia is the main international backer of al-Assad’s regime, having blocked two resolutions targeting it in the UN Security Council and supplied it with arms. Russian warships also called at the Syrian port of Tartus in January. Al-Assad’s forces have stepped up their assault on insurgents in recent weeks, using artillery to bombard the city of Homs, a hotbed of protests, media reported, citing Syrian opposition activists who said several hundreds were killed in the attack. The pro-government Syrian news agency SANA blamed the clashes on attacks by unspecified terrorist groups. –Global Security

20 Responses to Iran says it can hit U.S. interest anywhere – Syria is the first domino to WWIII