Posted on August 13, 2020 by The Extinction Protocol 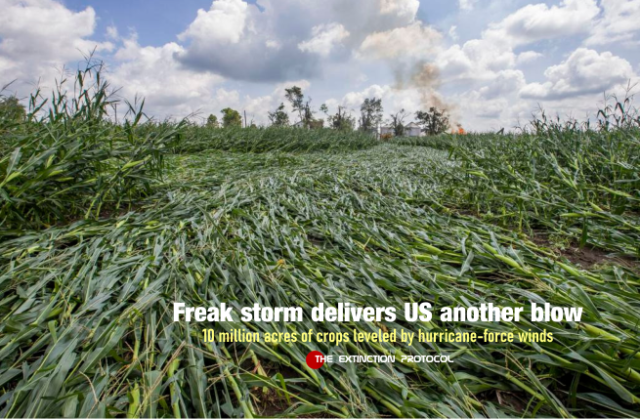 On Monday evening, a violent, fast-moving thunderstorm complex known as derecho tore a 700-mile path from Nebraska to Indiana. Winds over 70 mph battered Chicago and as of Thursday afternoon, more than 300,000 people were still without power in northern Illinois as well as Iowa, the state hardest hit. The destructive storm laid siege to more than 10 million acres of Iowa’s corn and soybean crop, devastating farmers and capping off what has already been a difficult few years of farming for many.

Up to 43 percent of the state’s corn and soybean crop has suffered damage from the storms that brought winds exceeding 100 miles per hour at times, a severe blow to a $10 billion industry that’s central to the Hawkeye State’s economy. The magnitude of the battered vegetation was even visible on the same weather satellites used to track Monday’s violent thunderstorms. Steve Bowen, a meteorologist and head of catastrophe insight for the reinsurer Aon, said the damage toll to agriculture alone is likely to reach the billions of dollars.

“This has all the makings of a billion-dollar agricultural impact in Iowa and Illinois,” he wrote in a Twitter message. “With that said, it will take some time for farmers to determine how much of the downed crop is salvageable for harvest. When combined with the rest of the physical property damage to homes, businesses, vehicles, and infrastructure, it is entirely plausible that the derecho was responsible for a multi-billion-dollar economic cost on its own.”

State officials were surveying the damage in hopes that some of the crop may be salvageable. Iowa Gov. Kim Reynolds (R) issued a disaster proclamation for 20 Iowa counties, freeing up state funding for disaster response and recovery. The state is also making grants available to low-income families who find themselves faced with food, repair, or temporary housing expenses in the wake of the disaster. “Although it will take days or weeks to know the full scope of [the] damage, initial reports are significant,” Reynolds said at a news conference on Tuesday. She noted that the state is working to frame its storm response while also managing the ongoing coronavirus pandemic.  –Washington Post