Posted on July 26, 2020 by The Extinction Protocol 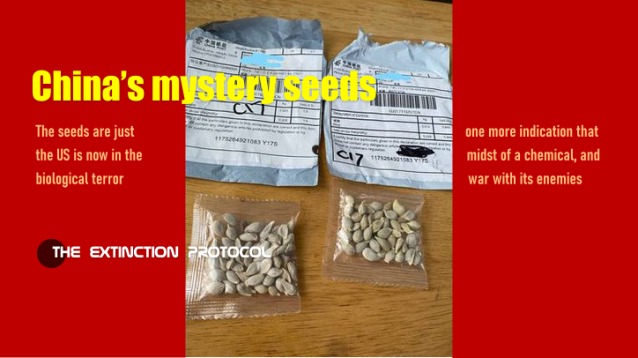 A strange package has been sent to people in multiple states: random, unidentified seeds from China. Residents in Washington, Utah and Virginia have received small packages of seeds in the mail that appear to be sent from China, officials said. “Today we received reports of people receiving seeds in the mail from China that they did not order,” the Washington State Department of Agriculture said Friday. “The seeds are sent in packages usually stating that the contents are jewelry. Unsolicited seeds could be invasive, introduce diseases to local plants, or be harmful to livestock.”

The seeds often come in sealed packages, and people should not open the packages, officials said. It should be reported to the U.S. Department of Agriculture for agricultural smuggling. “Invasive species wreak havoc on the environment, displace or destroy native plants and insects and severely damage crops,” the Virginia Department of Agriculture and Consumer Services said in a statement Friday. “Taking steps to prevent their introduction is the most effective method of reducing both the risk of invasive species infestations and the cost to control and mitigate those infestations.” Lori Culley, who lives in Tooele, Utah, told Fox 13 that she found two small packages in her mailbox Tuesday that had Chinese writing on them.

“I opened them up and they were seeds,” Culley told the news station. “Obviously they’re not jewelry!” In Utah, at least 40 people had received mysterious seeds, Fox 13 reported. It is unclear how many people in Virginia and Washington were mailed a package of seeds, but officials said “several.”  –News Tribune

6 Responses to Mysterious seed packets from China sent to dozens of people in 3 states, officials say