The very strange year of 2020: The solar system gets more visitations from a series of comets

Posted on June 26, 2020 by The Extinction Protocol 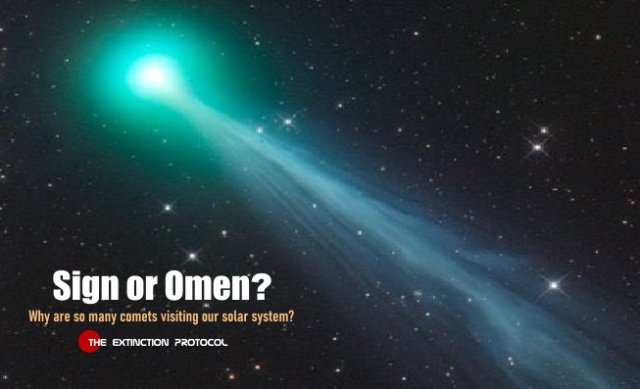 “And there shall be signs in the sun, and in the moon, and in the stars; and upon the earth distress of nations, with perplexity; the sea and the waves roaring; men’s hearts failing them for fear and for looking after those things that are coming on the earth: for the powers of heaven shall be shaken”  – (Luke 21:25, 26).

2020: The year of locust plagues, giant hornets, earthquakes, volcanic eruptions, giant dust storms, wars, strange moons, wildfires, plagues, financial-market meltdowns, deadly tornado outbreaks, global riots and protests, and now – comets. Our plate is full. We dare to ask how much worse can it get? And why so many comets? We seem to have entered a region of space where the universe appears to be throwing more objects in our direction. We certainly get it now – the year 2020 will definitely go down by us as one of the worst on record.

And then there were five. Though we’re long overdue for the next great ‘Comet of the Century,’ 2020 seems intent on throwing decent binocular comets our way, the ranks of which include comets C/2017 T2 PanSTARRS, C/2019 Y1 and C/2019 Y4 ATLAS and C/2020 F8 SWAN. Now, C/2019 U6 Lemmon is set to take center stage in July. Website Space Weather said: “Comet NEOWISE (C/2020 F3) is also plunging toward the sun for a close encounter near the orbit of Mercury on July 3rd.”

Discovered on Halloween night, October 31, 2019 by the prolific Mount Lemmon Sky Survey based outside of Tucson, Arizona, comet C/2019 U6 is one of a long lineage on comets to bear the Lemmon moniker. The comet is on a 9,250 year orbit inbound, and departs the inner solar system on a 5,200 year orbit outbound. A newfangled technology known as ‘farming’ was just starting to trickle into Europe from the Middle East around the seventh millennium BCE, last time Comet U6 Lemmon rolled ’round to the inner solar system. The comet is on a steep orbit inclined 61 degrees relative to the ecliptic plane. Had this comet come by in mid-May, we would have had a truly spectacular pass, just 0.027 AU (2.5 million miles/4 million kilometers) interior to the orbit of the Earth, or 10 times the Earth-Moon distance.

Any given comet entering the inner solar system stands a 40% chance at having its orbit modified by Jupiter on its outbound leg. This famously happened to Comet Hale-Bopp in the late 1990s, and this is also now the case with the 2020 tale of Comet U6 Lemmon.  Up north, we should get our first good views of Comet U6 Lemmon in late June, as the comet vaults up to about 30 degrees above the western horizon at sunset. We’ll see the comet on its outbound leg in July through August, passing through the constellation of Sextans the Sextant, then vaulting northward above the ecliptic into Leo and Virgo. At its brightest, Comet U6 Lemmon may flirt with naked eye visibility in early July, topping out at +5th magnitude. As of writing this in late June, the comet seems to have been an over-performer for southern hemisphere observers, holding at +8 magnitude in early June and approaching +6th magnitude as it neared perihelion.

Moving at its fastest across the sky in late June, the comet will be clear 2 degrees a day, four times the diameter of a Full Moon. The comet just came off of perihelion at 0.915 AU (85 million miles/137 million kilometers) from the Sun on June 18th, and is very slowly revealing itself for northern hemisphere observers low in the dusk sky.   –Universe Today

10 Responses to The very strange year of 2020: The solar system gets more visitations from a series of comets