Posted on June 18, 2020 by The Extinction Protocol 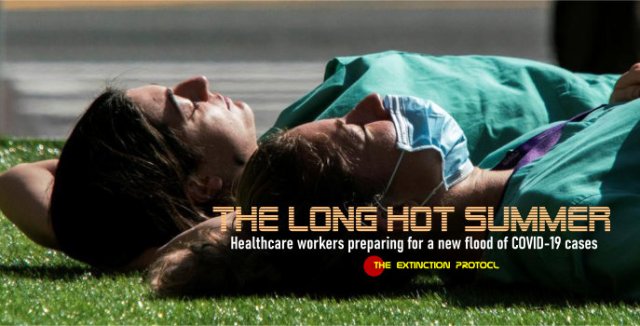 A coronavirus model once used by the White House now projects more than 200,000 Americans could die of COVID-19 by October 1. The prediction went up by more than 30,000 since last week. As of Tuesday, more than 116,000 people in the U.S. have died of the coronavirus, and the death toll is still growing by hundreds per day. Infection rates and hospitalizations are rising in numerous states as businesses open up and people drop precautions. According to the latest model from the Institute for Health Metrics and Evaluation at the University of Washington, a research institute once utilized by the White House for coronavirus projections, another 85,000 or so deaths are now projected by October 1.

HME’s interactive projections show that by October 1, deaths from the coronavirus in the United States could reach anywhere from 171,000 to 270,000, with a likely figure in between of about 201,129. Daily deaths from the coronavirus are expected to begin rising again in September, after they started to plateau nationwide this month for the first time. According to the IHME, “rising mobility and premature relaxation of social distancing in some states are the main reasons” for the projected increase.

IHME Director Dr. Christopher Murray explained the reasons behind the upward trend at a June 11 press briefing, before the institute raised its projections again this week. “Starting in the third week of August in our forecast at the national level, we see the daily death rate… going up again, after having been declining since mid-April at the national level,” he said. “That increase in daily deaths really starts to gather momentum from mid-September onwards.”

“What’s underlying that is two factors: The steady rise in contact rates, steady rise in mobility, and the likely continued relaxation of mandates over the course of the summer. Combined with the increasingly clear signal that seasonality is important,” he said. According to the IHME, “Higher mobility means higher transmission and more infections at the beginning of the expected second wave” in the fall. As COVID-19 cases continue to decline in New York, once the epicenter of the nation’s outbreak, new hotspots are emerging in states across the South and West. Some health experts say we could be seeing the impact of reopening too early.  –CBS News

A recent resurgence of the CCP virus in China’s capital has forced top officials to warn that a worse situation is yet to come. Authorities have sealed off all neighborhood compounds as of June 17, after dozens of cases emerged from the sprawling Xinfadi food market. Beijing is now scrambling to control movements in and out of the city, halting trains and canceling nearly 70 percent of flights at its two international airports. All school classes have been suspended. Beijing officially reported 137 new infections as of June 17, including a jump of 33 within a 24-hour span. Authorities have underreported numbers before; nonetheless, the cluster outbreak prompted health authorities to conduct mass testing.

The increase is especially concerning given that China has taken extraordinary measures to keep the virus out of its political center. “The virus outbreak in Beijing is still on an upward trend. The risk of virus spreading is significant and controlling it is difficult,” Pang Xinghuo, deputy director of the city’s Center for Disease Control and Prevention, said at a press conference. Noting the sharp increase in cases, Yang Zhanqiu, a professor at the virology laboratory at Wuhan University, suspected that the virus may have reemerged as more contagious than in Wuhan. The virus multiplies more quickly in winter weather, and the summer heat should have made it more difficult for the virus to grow, Yang told state media.

If the Beijing strain is more contagious, this would present new challenges to creating an effective vaccine, he noted. The outbreak in Bejing has spread to at least four other provinces across the country due to people traveling to neighboring Hebei, the northeastern province of Liaoning, Sichuan in the southwest, and Zhejiang in China’s eastern coast. Several other provinces have established restrictions on travelers from Beijing.   –NTD