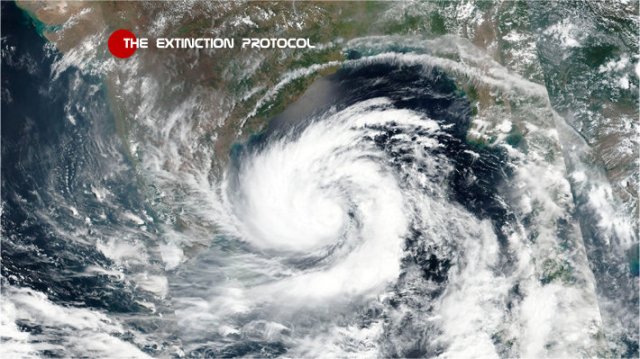 NEW DELHI – India and Bangladesh are preparing to evacuate up to 3 million people in the path of a potentially devastating cyclone, a challenge made even more daunting by the rising number of coronavirus infections in both countries. Cyclone Amphan is expected to slam into the river delta at the top of the Bay of Bengal on Wednesday local time, bringing dangerous winds, heavy rain, surging tides and flooding. Super Cyclone Amphan became the strongest storm ever recorded in the Bay of Bengal on Monday night, after intensifying with sustained wind speeds of up to 270 kilometers per hour (165 miles per hours), according to data from the U.S. Joint Typhoon Warning Center.

India had classified it as a “super cyclonic storm,” the most powerful type of cyclone and only the second such storm in the area since 1999. It weakened slightly on Tuesday but is still the equivalent of a Category 4 hurricane. The pandemic is intensifying the difficulty of preparing for the storm. India has more than 100,000 confirmed cases of the novel coronavirus, while Bangladesh has 25,000. Both countries have imposed crippling lock-downs that have left tens of millions of people with no income.

Now those vulnerable to the storm are facing the unprecedented combination of a natural disaster and a pandemic. Some evacuees say they fear catching the virus in emergency shelters, where they may face hours in enclosed spaces with little ability to maintain distance from others. Authorities are attempting to reduce crowding. In coastal areas, Bangladesh has turned schools and colleges into makeshift shelters, increasing the total available capacity from 4,000 to more than 12,000, said Mohammad Mohsin, director general of country’s disaster management department. “We did this to maintain social distancing,” he said. In India, two states will bear the brunt of the cyclone’s impact: West Bengal and Odisha. In some Odisha shelters, people are required to use hand sanitizers before entering and to wear masks for the duration of their stay.

Pradeep Jena, a senior government official overseeing the disaster relief effort in Odisha, described the current evacuation as a “great challenge” since people are already under “psychological stress” from the spread of covid-19, the disease caused by the coronavirus. He urged authorities to explain to people that the immediate danger from the storm is greater than the threat of infection. But some people living in the state’s coastal areas are not persuaded, particularly in places where cyclone shelters were previously being used as quarantine centers.  –LMT