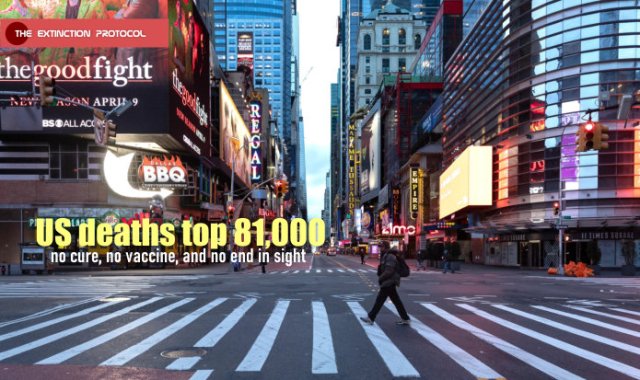 The U.S. coronavirus death toll passed 80,000, far and away the most reported deaths of any country in the world, according to data from Johns Hopkins University. America marked that grim death toll Monday as almost every state, except for Connecticut and Massachusetts, have made plans to partially reopen some businesses. In New York, where there have been more than 26,000 deaths, coronavirus infection and hospitalization rates are down to where they were nearly two months ago, Gov. Andrew Cuomo said. In the past day, 488 coronavirus patients were admitted to hospitals, similar to the state total from March 19, and 161 people died over the past day, near the same level of deaths as on March 26.

“In many ways, we’re on the other side of the mountain,” he said on Monday. As such, Cuomo said parts of upstate New York will be able to begin a phased reopening on Friday when the state’s shutdown order expires. He has said that regions can reopen in phases if they hit seven specific criteria, including 14-day declines in hospitalizations and deaths, hospital bed availability, testing capacity and contact tracing. New York City has hit just four of the seven metrics to reopen. New York has been the epicenter of America’s coronavirus outbreak and has had more confirmed coronavirus deaths than all but a few countries. At the peak of the state’s outbreak, more than 750 people died every day from April 7 to April 11, and the decline since then has been “painfully slow,” Cuomo said last week.

Cuomo emphasized that the reopening will be done “intelligently” and contrasted his reopening plan with that of other states that are reopening despite not hitting the CDC’s guidelines to do so. Indeed, a leading model increased its US coronavirus death toll projection again as governors continue lifting measures toward a reopening. The model from the Institute for Health Metrics and Evaluation at the University of Washington now forecasts more than 137,000 Americans will die by early August, up from its previous forecast of 134,000 deaths.

That rise is largely due to Americans moving around more, IHME Director Dr. Christopher Murray said in a news release, adding that in some places the upward trend in movement began before statewide measures were relaxed. Researchers tracked that movement through anonymous cell phone data, according to the release. Unless and until we see accelerated testing, contact tracing, isolating people who test positive, and widespread use of masks in public, there is a significant likelihood of new infections,” Murray said in the release. According to Johns Hopkins, more than 1.3 million people in the United States have contracted coronavirus since the first reported cases in January.  –CNN