Posted on May 2, 2020 by The Extinction Protocol 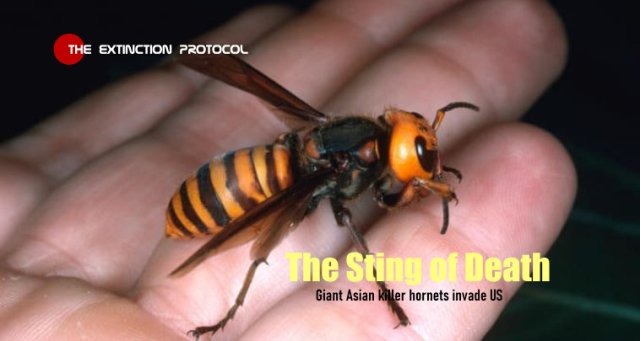 LAINE, Wash. — In his decades of beekeeping, Ted McFall had never seen anything like it. As he pulled his truck up to check on a group of hives near Custer, Wash., in November, he could spot from the window a mess of bee carcasses on the ground. As he looked closer, he saw a pile of dead members of the colony in front of a hive and more carnage inside — thousands and thousands of bees with their heads torn from their bodies and no sign of a culprit. “I couldn’t wrap my head around what could have done that,” Mr. McFall said. Only later did he come to suspect that the killer was what some researchers simply call the “murder hornet.”

With queens that can grow to two inches long, Asian giant hornets can use mandibles shaped like spiked shark fins to wipe out a honeybee hive in a matter of hours, decapitating the bees and flying away with the thoraxes to feed their young. For larger targets, the hornet’s potent venom and stinger — long enough to puncture a beekeeping suit — make for an excruciating combination that victims have likened to hot metal driving into their skin. In Japan, the hornets kill up to 50 people a year. Now, for the first time, they have arrived in the United States. Mr. McFall still is not certain that Asian giant hornets were responsible for the plunder of his hive. But two of the predatory insects were discovered last fall in the northwest corner of Washington State, a few miles north of his property — the first sightings in the United States.

Scientists have since embarked on a full-scale hunt for the hornets, worried that the invaders could decimate bee populations in the United States and establish such a deep presence that all hope for eradication could be lost. “This is our window to keep it from establishing,” said Chris Looney, an entomologist at the Washington State Department of Agriculture. “If we can’t do it in the next couple of years, it probably can’t be done.” On a cold morning in early December, two and a half miles to the north of Mr. McFall’s property, Jeff Kornelis stepped on his front porch with his terrier-mix dog. He looked down to a jarring sight: “It was the biggest hornet I’d ever seen.”

The insect was dead, and after inspecting it, Mr. Kornelis had a hunch that it might be an Asian giant hornet. It did not make much sense, given his location in the world, but he had seen an episode of the YouTube personality Coyote Peterson getting a brutal sting from one of the hornets. Beyond its size, the hornet has a distinctive look, with a cartoonishly fierce face featuring teardrop eyes like Spider-Man, orange and black stripes that extend down its body like a tiger, and broad, wispy wings like a small dragonfly. Mr. Kornelis contacted the state, which came out to confirm that it was indeed an Asian giant hornet. Soon after, they learned that a local beekeeper in the area had also found one of the hornets.  –DNYUZ

4 Responses to Part I: Tracking the ‘Murder Hornet’ – a deadly insect pest has reached North America