Posted on March 24, 2020 by The Extinction Protocol 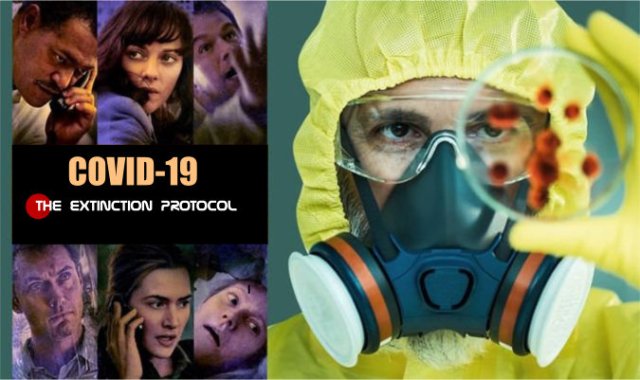 Italy on Tuesday received more reassuring evidence that its coronavirus infection rate was slowing thanks to a painful lock-down that other nations are starting to apply at great economic cost. Health officials across the ravaged Mediterranean country are poring over every new piece of data to see whether two weeks of bans and closures have made a dent in the crisis. The harshest restrictions are theoretically due to expire on Wednesday evening — although the government is all but certain to extend them in some form for weeks or even months. Italy’s 743 new deaths broke two days of successive declines that had taken the number down to 601 on Monday. It set a world record of 793 fatalities on Saturday.

But officially registered new infections rose just eight percent — the same as Monday and the lowest level since Italy registered its first death on February 21. The coronavirus has killed another 240 people in France, the top French health official said on Tuesday, bringing the death toll in the country from the pandemic to 1,100. Jerome Salomon told reporters that 22,300 people had tested positive for the virus in France, with a total of 10,176 hospitalized of whom 2,516 people are in intensive care. Officials believe that the published number of those infected largely underestimates the real figure, as only those showing severe symptoms are usually tested.

U.S. continues to downplay the virus threat: President Trump not only wants to avoid a national shutdown – he’s already talking about easing restrictions by Easter – April 12, 2020

Turkey confirmed seven more deaths from coronavirus late Tuesday, bringing the total number of fatalities to 44. A total of 3,952 coronavirus tests have been conducted in the last 24 hours on people suspected of contracting the virus, and 343 tested positive, bringing the tally of infections to 1,872, Health Minister Fahrettin Koca said on Twitter. While most victims of the virus worldwide have been the elderly, health officials fear they may have contracted it from the young carriers who may be asymptomatic. Out of more than 409,000 confirmed cases, the death toll now exceeds 18,200, while nearly 106,500 have recovered.

German hospitals with spare capacity on Tuesday welcomed their first coronavirus patients from Italy, where an overwhelmed health-care system has seen the pandemic kill more people than in any other country. Ahead of an expected larger wave of home-grown infections that German authorities are preparing for, a first group of six Italian patients arrived at Leipzig airport in the eastern state of Saxony on Tuesday morning. The western state of North Rhine-Westphalia also announced plans to take 10 Italian patients over coming days. “We need solidarity across borders in Europe,” said state premier Armin Laschet. “We want to preserve the European spirit.” Germany has 27,000 confirmed coronavirus cases but only 114 deaths, and is using the time before the expected surge to strengthen its intensive-care capacity. The government is offering hospitals huge state subsidies to help accelerate plans to double that capacity, currently at around 28,000 beds. –TRT World

Moscow – Russian authorities do not know the full extent of the coronavirus outbreak across the country and should step up measures to stem the pandemic, a top official said Tuesday. Russia, which shares a border with China and has a population of 144 million, has officially reported 495 cases of the coronavirus but no confirmed fatalities. “The problem is that the volume of testing is very low and no one has a clear picture” of the situation in Russia and the world, Moscow Mayor Sergei Sobyanin told President Vladimir Putin during a meeting.

“The picture that is unfolding is serious,” said Sobyanin, who heads an anti-coronavirus task force at Russia’s State Council. He said the number of people infected with the coronavirus was “significantly” higher than official figures. Taking the day to discuss the epidemic, Putin later visited Moscow’s new infectious diseases clinic, where he donned a hazmat suit and met head doctor Denis Protsenko. He warned the president that Russia may be headed for the Italian scenario of a spike in heavy cases and fatalities, particularly in Moscow.  –France 24

10 Responses to Unending Misery: the number of deaths keeps rising – the contagion is spreading more rapidly