Posted on March 12, 2020 by The Extinction Protocol 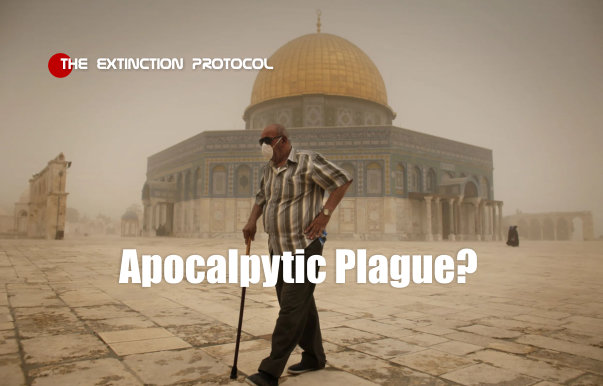 Federally funded tests conducted by scientists from several major institutions indicated that the novel form of coronavirus behind a worldwide outbreak can survive in the air for several hours. A study awaiting peer review from scientists at Princeton University, the University of California-Los Angeles and the National Institutes of Health (NIH) posted online Wednesday indicated that the COVID-19 virus could remain viable in the air “up to 3 hours post aerosolization,” while remaining alive on plastic and other surfaces for up to three days.

“Our results indicate that aerosol and fomite transmission of HCoV-19 is plausible, as the virus can remain viable in aerosols for 42 multiple hours and on surfaces up to days,” reads the study’s abstract. The test results suggest that humans could be infected by the disease simply carried through the air or on a solid surface, even if direct contact with an infected person does not occur. That finding, if accepted, would come in stark contrast to previous media reports that suggested the virus was not easily transmittable outside of direct human contact.

Confirmed cases of coronavirus infection have crossed 121,000 worldwide, with more than 4,300 deaths. The majority of deaths have occurred in mainland China, where the virus is thought to have originated, and Italy, which is experiencing its own large-scale outbreak. The World Health Organization (WHO) declared the coronavirus outbreak a pandemic on Wednesday, with officials warning that they were “deeply concerned both by the alarming levels of spread and severity, and by the alarming levels of inaction” by world governments to prevent the disease from spreading. –The Hill

Blessed are the little ones: One of the few mercies of the spreading coronavirus is that it leaves young children virtually untouched — a mystery virologists say may hold vital clues as to how the virus works. In China, only 2.4 percent of reported cases were children and only 0.2 percent of reported cases were children who got critically ill, according to the World Health Organization. China has reported no case of a young child dying of the disease covid-19. Meanwhile, the new coronavirus has proved especially deadly on the other end of the age spectrum. The fatality rate in China for those over 80 is an estimated 21.9 percent, per the WHO. For ages 10 to 39, however, the fatality rate is roughly 0.2 percent, according to a separate study drawing on patient records of 44,672 confirmed cases. And fatalities and severe symptoms are almost nonexistent at even younger ages.

That means the new coronavirus is behaving very differently from other viruses, like seasonal influenza, which are usually especially dangerous for the very young and very old. “With respiratory infections like this, we usually see a U-shaped curve on who gets hits hardest. Young children at one end of the U because their immune systems aren’t yet developed and old people at the other end because their immune systems grow weaker,” said Vineet Menachery, a virologist at the University of Texas Medical Branch. “With this virus, one side of the U is just completely missing.”  –Washington Post

Israel will bar all visitors from entering Israel unless they can quarantine and order all returning Israelis into self-isolation to counter the spread of the coronavirus: an unprecedented move which effectively seals off the country. The new measures come as the Palestinian authorities put the West Bank on lock-down amid a spike in cases there. So far 39 people have been infected in Israel and 25 in the West Bank, according to the World Health Organization (WHO), prompting both Israel and the Palestinian authorities to impose some of the world’s most strict measures.

But both sides fear that the crumbling Palestinian health systems, in particular, will not be able to cope with an extended outbreak. ​ On Monday Israeli prime minister Benjamin Netanyahu announced entry constraints had been extended to all countries and ordered all Israelis to self-quarantine for 14 days upon returning home. Israeli media said that, as of Thursday, foreigners would be admitted to the country only if they can prove they have the means to quarantine as well. “Anyone who arrives in Israel from abroad will enter a 14-day isolation,” Mr. Netanyahu said in a video statement, adding that the measure would be in effect for two weeks, initially.  –Independent

1 Response to Children spared: end-time plague? Coronavirus can survive in the air for 3 hours – Israel treats as existential threat