Posted on June 21, 2016 by The Extinction Protocol

June 2016 – WORLD POPULATION – The number of refugees and others fleeing their homes worldwide has hit a new record, spiking to 65.3 million people by the end of 2015, the United Nations said Monday. Europe’s high-profile migrant crisis, its worst since World War II, is just one part of a growing tide of human misery led by Palestinians, Syrians and Afghans. Globally, close to one percent of humanity has been forced to flee.

“This is the first time that the threshold of 60 million has been crossed,” the UN refugee agency said. The figures, released on World Refugee Day, underscore twin pressures fuelling an unprecedented global displacement crisis. As conflict and persecution force growing numbers of people to flee, anti-migrant political sentiment has strained the willingness to resettle refugees, said UNHCR chief Filippo Grandi. “Instead of burden-sharing, we see borders closing. Instead of political will, there is political paralysis and humanitarian organizations like mine are left to deal with the consequences and struggling to save lives on limited budgets,” Grandi told reporters in Afghanistan’s capital Kabul.

The number of people displaced globally rose by 5.8 million through 2015, according to the UN figures. Counting Earth’s population at 7.349 billion, the UN said that one out of every 113 people on the planet was now either internally displaced or a refugee. They now number more than the populations of Britain or France, the agency said, adding that it is “a level of risk for which UNHCR knows no precedent. Every 24 minutes a person is forced to choose exile from his home,” Grandi said in Kabul. Displacement figures have been rising since the mid-1990s, but the rate of increase has jumped since the outbreak of Syria’s civil war in 2011.

Of the planet’s 65.3 million displaced, 40.8 million remain within their own country, 21.3 million have fled across borders and are now refugees, while the remainder are asylum seekers. Palestinians are the largest group of refugees at more than five million, including those who fled at the creation of Israel in 1948 and their descendants. Syria is next on the list, with 4.9 million refugees, followed by Afghanistan (2.7 million) and Somalia (1.1 million). – Rising conflict, shrinking solutions.  A mixture of worrying factors has led to rising displacement and narrowing space for refugee resettlement.

“Situations that cause large refugee outflows are lasting longer,” the agency said, including more than 30 years of unrest in both Somalia and Afghanistan. New and intense conflicts as well as dormant crises that have been “reignited” are further fuelling displacement, UNHCR said, pointing to South Sudan, Yemen, Burundi and the Central African Republic, aside from Syria. Beyond the refugee hotspots in the Middle East and Africa, UNHCR said there were also troubling signs in Central America, where growing numbers of people fleeing gang violence led to a 17-percent rise in those leaving their homes through 2015.

Faced with an increasing need to resettle those facing persecution, the answers are not always obvious. “The rate at which solutions are being found for refugees and internally displaced people has been on a falling trend since the end of the Cold War,” the UN agency said. “We simply do not have the option of turning our backs and walking away,” Grandi warned in Kabul, echoing wider calls among humanitarian chiefs for world powers, especially in the West, to be more welcoming of migrants and refugees.

Turkey — which struck a controversial deal with the European Union in March to stem Europe’s migrant crisis — hosted the highest number of refugees through 2015 at 2.5 million, mostly Syrians. Germany received the highest number of asylum requests (441,900) over the 12-month span, demonstrating the country’s “readiness to receive people who were fleeing to Europe via the Mediterranean.” –Yahoo News 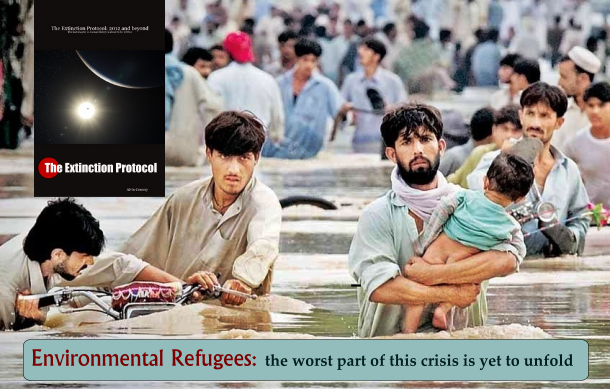 To survive what’s before us; we have to take a note from the animals – mass seasonal migration to flee the areas of the Earth that will become increasingly inhospitable from the extremes of climate change…Like wild animals scurrying from the fury of a raging wildfire, the human race will have to learn to become mobile and transmigratory if it plans to survive the changes that are already upon us.

Since you can’t shuffle 7 billion people around the planet and you can’t shield them from an increasing set of environmental risk hazards, a vast majority of the population of the planet will be wiped out. The fortunate survivors will become geo-nomads, wandering between mountains, caves, and decayed urban landscapes to escape the ravages of a planet now at war with the natural elements. Extreme winters, partial glaciations, blistering temperatures from a runaway global heating trend and a chaotic Sun on the precipice of convulsion will render life in many regions of the world unbearable. Every nation will be under some duress from nature’s curse. Agricultural ecology will be equally taxed, as growing seasons slowly disappear one by one. The frequency of natural disasters and cataclysms will intensify without respite, as the planet succumbs more and more to this chaotic model. Earth is falling under the shadow of a death march.  –The Extinction Protocol, page 9, 2009, Alvin Conway