Posted on February 8, 2016 by The Extinction Protocol 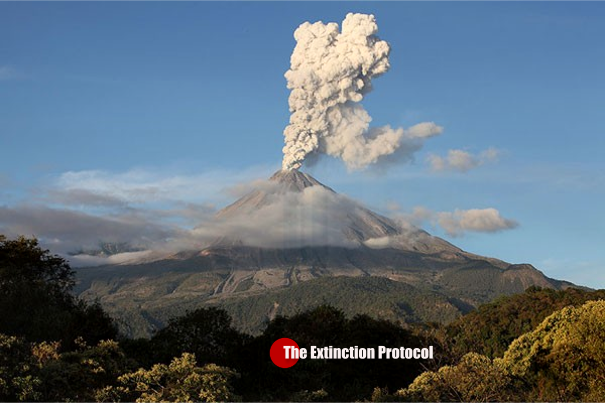 February 2016 – MEXICO – A volcano eruption in western Mexico has sent a spectacular plume of smoke and ash high into the air. Colima volcano is one of three that make up the Colima Volcanic Complex, near the west coast of Mexico. It is one of the most active volcanoes in the country and has erupted more than 40 times, including several times in the past few years. The volcano is permanently monitored by the University of Colima. –ABC

Kilauea Volcano – Hawaii: (Jan 10, 2016) Nature’s fury was on full display as a rock fall in Hawaii cause an impressive explosion at Kilauea volcano. Volcano watchers recorded the massive explosion on Friday morning, when rocks splashed into the lake of lava at Halemaumau crater. These types of explosions are likely to occur when the lava lake level is relatively high, as it was on Friday, scientists say.

In fact, the lake was about 100 feet below the vent’s rim right before the blast. When the lava lake is high, scientists say rocks in the vent wall heat up, expand and then become unstable causing a big section of the rocks to collapse. Fortunately, the explosion does not pose a threat to any neighboring communities. Kileaua’s ongoing eruption began way back in January of 1983. –ABC 13

Mount Egon – Indonesia: (Jan 19, 2016) More than 1,200 people were evacuated from their homes when a volcano in eastern Indonesia spews clouds of ash and toxic gas into the air on January 19, 2016. Officials said they had distributed thousands of gas masks to villagers around Mount Egon in eastern Flores Island as the choking fumes from the volcano intensified. All residents within three kilometers of the volcano were ordered to evacuate and roads were also closed.

The volcano began rumbling in December of 2015 but has become more active in recent months. During its last serious eruption in 2008, Mount Egon blasted smoke and volcanic material nearly six kilometers into the atmosphere. In January 2004, the volcano erupted, forcing 6,000 people to evacuate the area. Mount Egon is one of 129 active volcanoes in Indonesia, which sits on the Ring of Fire, a belt of seismic activity running around the basin of the Pacific Ocean. –ABC

San Miguel – El Salvador: A new phase of eruptive activity began at the volcano on January 11, 2016. Accompanied by a spike in volcanic tremor, weak to moderate ash emissions have been occurring from the main crater. This activity, the 22nd eruptive phase since Dec 2013 according to MARN, has been slowing waning since the eruption.

Momotombo – Nicaragua: A strong vulcanian explosion occurred January 12, 2016 at 12:10 local time at the volcano. An ash plume rose approximately 3 km from the summit and it generated a small pyroclastic flow.

The 1,940-metre peak is believed to have erupted 10 times in the past, and could be due another as the last on record was in March 1882. According to locals, heavy smoke enveloped the area near the town as well as Alamada in Wao town and the blaze appeared “lava-like,” as it glowed from the distance throughout Thursday night and into the early hours. –Express

Popocatepetl Volcano – Mexico: (Jan 25, 2016) Ashes from the Popocatepetl volcano have rained down on the airport of the central Mexican city of Puebla, prompting authorities to temporarily shut down operations.

Four explosions and 39 low-intensity exhalations of ash were recorded between Sunday and Monday at the 5,452-metre volcano, according the National Disaster Prevention Centre. Puebla state civil protection department director Jesus Morales said airport operations would be closed for three hours so workers could remove ash from the runway.

The shutdown will not affect any flights as none are due to land during that time, he said. Popocatepetl, which is 55 kilometres south-east of Mexico City, had its last major eruption in 2000, forcing thousands of people to evacuate from surrounding towns. –ABC

Turrialba Volcano – Costa Rica: On Saturday afternoon, geologists at the Observatory on Volcanology and Seismology at the National University of Costa Rica (Spanish acronym: OVSICORI) reported a new eruption at the Turrialba Volcano, the most active colossus in our country. The volcanic event took place about ten minutes before 2:00 pm during a warm, yet extremely windy, afternoon. The seismographic sensors of the OVSICORI began stirring after 1:50 pm, at which time the scientists on duty activated their crater cameras to capture the eruption.

In the beginning, the eruption was mostly a slow emanation of volcanic ash and noxious gases. About ten minutes into the natural event, a more powerful ejection occurred and a solid plume formed about 500 meters into the air. Thanks to the crisp weather conditions and the clear-blue afternoon skies, the eruption on the western crater was visible from the summit of the nearby Irazu volcano.

Chemistry experts at the OVSICORI combined their observations with data from the Institute of Meteorology to provide a forecast of where the ash clouds were headed yesterday. To this effect, they used the AERMOD atmospheric dispersion modeling system to create a forecast that indicated a northwesterly direction high over Guapiles and passing over most of the Heredia province on municipal elections day. Some ash fell on the vegetation and crops of the massive Finca La Picada farm near the volcano. Elsewhere, a strong smell of sulfur was detected by neighbors in Concepcion de Heredia.

As previously reported by The Costa Rica Star, past activity from the Turrialba has disrupted daily life with school and airport closures as well as diminished farming operations; nonetheless, that does not seem to be the case at this time. –Costa Rica Star

26 Responses to Earth changes intensifying: Volcanoes across the globe go ballistic as 2016 arrives