59: Galapagos Island volcano erupts for the first time in 33 years 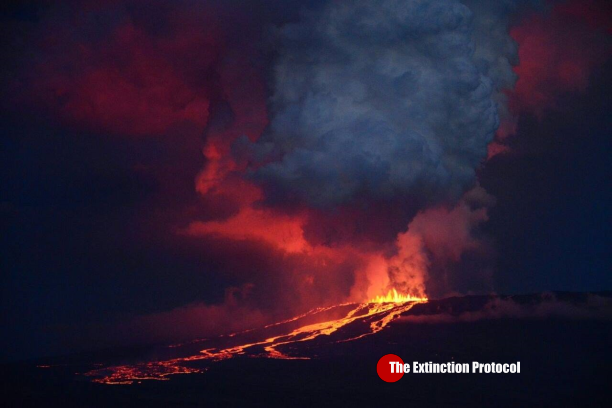 May 2015 – GALAPAGOS ISLANDS, Ecuador – After almost 33 years of inactivity, Wolf Volcano, the highest in the Galapagos Islands and home to the only population of pink iguanas in the world, began to erupt early Monday, the Galapagos National Park reported. “The volcano is not located near a populated area,” the Park said. “There is no risk for the human population.” The Galapagos Islands are located in the Pacific Ocean, some 1,000 kilometers off the coast of Ecuador. Pink iguanas share the habitat with yellow iguanas and giant tortoises, located on the northwest flank. The lava flow has southeasterly direction, so the park expects the animals won’t be affected.

The Galapagos National Park also said that currently there is no risk to tourism operations, but the Environment Ministry is notifying tourist operators to take precautions. Environment Ministry officials weren’t able to be reached for comment. The Wolf Volcano, located on Isabela Isla, is 1,707 meters above sea level. Its first recorded eruption was in 1797 and the latest was in 1982. The Galapagos are one of the most volcanically active regions in the world and famous for their unique flora and fauna. Charles Darwin visited the islands in 1835 and the creatures that live there helped inspire his theory of evolution. –WSJ

12 Responses to 59: Galapagos Island volcano erupts for the first time in 33 years

Leave a Reply to The Extinction Protocol Cancel reply