Who’s going to pay? The average cost to treat an Ebola patient could run as high as half a million dollars

Posted on October 8, 2014 by The Extinction Protocol 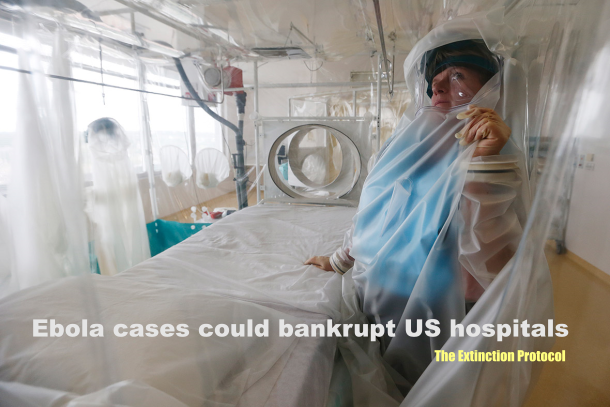 October 2014 – HEALTH – Caring for Thomas Eric Duncan, the Dallas Ebola patient, may cost as much as $500,000, a bill that his hospital is unlikely to ever collect. Duncan is in critical condition at Texas Health Presbyterian Hospital Dallas, where he has been isolated since Sept. 28. He’s on a ventilator, has been given an experimental medicine and is receiving kidney dialysis, a hospital spokeswoman said Tuesday. His treatment probably includes fluids replacement, blood transfusions and drugs to maintain blood pressure. There’s also the cost of security, disposing of Ebola-contaminated trash and equipment to protect caregivers. The bill may eventually total $500,000 including indirect costs such as the disruption to other areas of hospital care, said Dan Mendelson, chief executive officer of Avalere Health, a Washington consulting firm. Duncan’s care probably costs $18,000 to $24,000 a day, said Gerard Anderson, a health policy professor at Johns Hopkins University’s Bloomberg School of Public Health.

Duncan has been in isolation in the hospital for nine days so far. “If they recognize that he has no money they will clearly just write it off as charity care,” Anderson said in a telephone interview. Duncan came to the United States from Liberia on Sept. 20 on a tourist visa. He has no health insurance to pay for his care, said civil rights activist Jesse Jackson, who traveled to Dallas at the request of Duncan’s mother. Spokesmen for Texas Health Presbyterian and for the Liberian embassy in Washington declined to discuss who will pay for Duncan’s care. “It’s too early to make a decision about payment of bills; he is in critical condition,” Gabriel Williams, a Liberian Embassy spokesman, said in a phone interview. “The focus is on his health.” Duncan is the first case of Ebola diagnosed in the United States. Emory University Hospital in Atlanta and Nebraska Medical Center in Omaha have also treated Ebola patients, three of whom have been released after recovering. A fourth patient is under care in Omaha and a fifth in Atlanta. Neither of the hospitals would comment on the cost of treating those patients. Kent Brantly, the first person to be transported from Liberia to the United States for care, was covered under health insurance provided by his charity, Samaritan’s Purse, said Todd Shearer, a spokesman for the group. Two other aid workers, Nancy Writebol and Rick Sacra, went to Liberia with the Charlotte, N.C.-based missionary group SIM. They are covered by the group’s health and workers’ compensation insurance plans, and SIM plans to pay their $25,000 deductibles, said George Salloum, the group’s vice president for finance and operations.

Writebol’s evacuation from Liberia was covered in full by one of SIM’s insurance carriers, Aetna Inc., he said. He’s still waiting for bills from other carriers, whom he declined to name, and said he didn’t know what the hospital care cost. “The hospitals have not disclosed that information to us,” Salloum said in a phone interview. “I’m very anxious to find out, personally, just wondering what they’re charging for that kind of care.” Emory and Nebraska are known for their expertise in exotic diseases and careful isolation of infectious patients. Texas Health Presbyterian doesn’t not have that reputation, but is ranked the fifth-best hospital in the Dallas-Fort Worth region by U.S. News and World Report. Duncan arrived there in an ambulance on Sept. 28, after being initially sent home two days earlier from the emergency room with antibiotics. Anderson, a former federal health official, said that as a foreign citizen Duncan wouldn’t be eligible for any U.S. health programs such as Medicaid, for low income people. Texas hospitals charge $8,176 per day on average for treatment of viral illnesses, including exotic diseases such as West Nile virus and Dengue fever, said Andrew Fitch, a health-care pricing expert at NerdWallet, a San Francisco-based company that provides consumer finance and health data. That figure “is actually probably on the low end” for Ebola, Fitch said in a phone interview. “The isolation ward would bump up the charge a lot.” –Chicago Tribune

10 Responses to Who’s going to pay? The average cost to treat an Ebola patient could run as high as half a million dollars