Depletion of Central Valley’s groundwater may be causing earthquakes 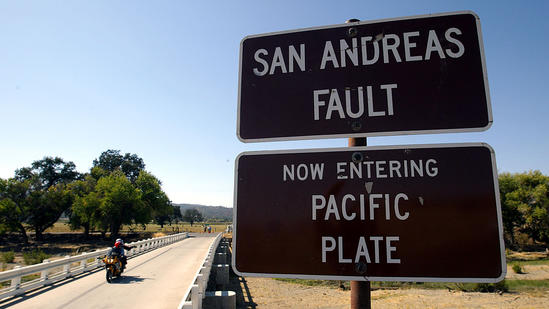 May 2014 – CALIFORNIA – For years, scientists have wondered about the forces that keep pushing up California’s mighty Sierra Nevada and Coast Ranges, causing an increase in the number of earthquakes in one part of Central California. On Wednesday, a group of scientists offered a new, intriguing theory: The quakes are triggered in part by the pumping of groundwater in the Central Valley, which produces crops that feed the nation. “These results suggest that human activity may give rise to a gradual increase in the rate of earthquake occurrence,” said the study published in the journal Nature. “During wet periods of time when the fault is loaded down, the forces that are keeping the fault clamped down are greater. It inhibits the sliding of the fault,” says Colin B. Amos, assistant professor of geology at Western Washington University. Using new GPS data, the scientists found that mountains closest to California’s thirsty Central Valley were growing at a faster-than-expected rate compared to nearby ranges. The growth spurt — about 1 to 3 millimeters a year — was enough to lift them by half a foot over the last 150 years. Groundwater is very heavy, and its weight depresses the Earth’s upper crust. Remove the weight, and the crust springs upward — and that change in pressure can trigger more small earthquakes, the researchers said. “It reduces the forces that are keeping the fault clamped together — leading to more small earthquakes during dry periods of time,” said Colin B. Amos, assistant professor of geology at Western Washington University, the study’s lead author.

Other scientists studying a seismically active area of southern Monterey County near Parkfield observed that there tend to be more earthquakes during dry months than during wet months. The number of earthquakes there every year has roughly doubled between 1984 and 2005. “During wet periods of time when the fault is loaded down, the forces that are keeping the fault clamped down are greater. It inhibits the sliding of the fault,” Amos said. But the question as to why earthquakes have been increasing in Parkfield over time has been a mystery. The groundwater theory introduced by Amos and his colleagues gives one possible answer. “Over the long term, because we’re losing more groundwater, it could give rise to more seismicity by reducing these overall forces,” Amos said. Groundwater has been slowly depleted in the Central Valley to quench the thirst of farms and cities since the mid-1800s. That irrigation has already caused dramatic changes. In the 1930s, water diversions prompted the disappearance of Tulare Lake, once the largest body of fresh water west of the Mississippi, which was 60 miles across. Over the last hundred and fifty years, the Central Valley’s groundwater reserve has lost about 38 cubic miles of water — enough to drain Lake Tahoe. According to the U.S. Geological Survey, Central Valley aquifers supply about 20% of the nation’s groundwater needs, making it the second-most-pumped aquifer system in the United States. The Central Valley produces one-quarter of the nation’s food, including 40% of its fruits and nuts.

The study published Wednesday does not suggest the next Big One to hit Los Angeles or San Francisco will be caused by human activity, Amos said. “Large earthquakes are going to occur on the San Andreas fault no matter what we do,” Amos said. But what is important is the idea that human activity could trigger more seismic movement. “It’s really opening up a possibility that humans are changing stresses on faults,” Amos said. “It’s a simple realization that human use of groundwater is having small but perhaps measurable impacts on the San Andreas Fault.” U.S. Geological Survey seismologist Susan Hough, who was not affiliated with the study, said the idea that groundwater depletion can trigger earthquakes is very plausible. Hough went a step further than the researchers, saying it’s possible that smaller earthquakes in the Parkfield area could eventually trigger larger earthquakes that head south toward Los Angeles. “If you raise the rate of little earthquakes, you also raise the probability of a bigger earthquake,” Hough said. Parkfield was the starting point of a magnitude 7.9 earthquake that hit the San Andreas fault in 1857. The fault unzipped south for nearly 200 miles, down to the San Gabriel Mountains and ending near Wrightwood. That fault was so massive that shaking lasted from 1 to 3 minutes, trees were uprooted, and buildings were destroyed. “As near as we can tell, the foreshocks were in the Parkfield area,” Hough said. “It won’t necessarily happen that way” again in our lifetime, she said. “But the fact that it did happen once means that it could happen.” Hough said further study was needed to determine whether groundwater depletion in other areas could also trigger earthquakes. The part of the San Andreas Fault around Parkfield is fairly weak — meaning not much change in pressure is needed to loosen the fault and cause earthquakes. In contrast, sections of the San Andreas closer to San Francisco and Los Angeles are much stronger and more locked. Steve Ingebritsen, hydrogeologist with the U.S. Geological Survey who was also unaffiliated with the study, called the theory “an interesting hypothesis from a credible group of investigators that will drive more research.” He called the suggestion that groundwater depletion could lead to more earthquakes “somewhat controversial” and that more study is needed elsewhere in California and around the world to see if the findings can be replicated. – LA Times