Another pandemic? H1N1 sweeping across U.S. and Canada in deadly wave

Posted on January 4, 2014 by The Extinction Protocol

January 4, 2014 – HEALTH – Cases of the H1N1 virus, also known as swine flu, across Canada and the U.S. are increasing at the approach of the peak flu season of February. The Centers for Disease Control reports that in the U.S., the flu season has hit southeastern states Alabama, Louisiana, Mississippi, Missouri, Oklahoma and Texas the hardest so far, and it is expected to spread across the nation in the coming weeks. Swine flu has not just affected the southern part of the United States. According the seasonal map issued by the Centers for Disease Control (CDC), many states are seeing widespread flu activity. In Wisconsin, 81 people have been admitted to a hospital over a period of a week with a majority of the cases attributed to the H1N1 virus. The biggest concern is the increase in the number of H1N1 incidences, which has doubled in the past two weeks, according to a Jan. 2 WBay report. A death from swine flu was just reported in Santa Clara, CA, as well. In Michigan, emergency departments are filled with hundreds of patients with flu-like symptoms. However, infants on life support because of the H1N1 virus are causing the most concern. North of the border in Toronto, the Montreal Gazette reports that 36 percent of 210 confirmed cases of influenza were H1N1. One swine flu victim has died. This is an increase of 33 percent from this point last year in Canada’s largest city. 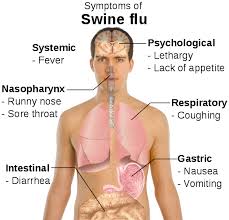 ut west in Alberta, there are 965 lab-confirmed cases of H1N1; 270 of those patients have had to be hospitalized. As of January 2, five people have died from the flu in Alberta. This has led the province to open five mass immunization clinics in four communities. Infectious diseases expert Dr. Alison McGeer tells CTV News that the amount of flu activity in Alberta this year is actually not that much higher than previous years. However, this is the first time that H1N1 has been the predominant strain of flu since the 2009 pandemic. This comes two months after it was reported that the pandemic 5 years ago might have killed 203,000 people worldwide – more than 10 times higher than first estimated. The results were based on lab tests by an international group of scientists. No statistics have been released in terms of the number of people getting flu shots in America. However, in Canada, a Harris-Decima poll found only about 44 percent of Canadians have either had a shot already or intend to get one this season. This is not much higher than last year’s number of 41 percent. Nevertheless, the high number of Canadians not getting a vaccine is creating a concern. Swine flu spreads fast because it is highly contagious. When an infected coughs or sneezes, tiny droplets of the virus are released into the air. Anyone who comes into contact with these droplets or touches a surface recently touched by an infected person can catch H1N1. While the seasonal flu affects older people, H1N1 affects the younger population, and particularly children. This is the biggest difference between this year’s flu season and past flu seasons. The CDC has sent a health notice to clinicians, reiterating its call for everyone aged 6 months and older to receive a flu vaccine.  –Guardian

Three more deaths in Michigan: Potentially deadly H1N1 — the influenza virus strain behind the 2009 pandemic — continues its resurgence in Michigan, with three more deaths reported by hospital officials. About a dozen adults and children — patients who previously were healthy — have been on life support at the University of Michigan Health System’s hospitals because of the virus, according to the hospital system. Three adults have died, according to a health system spokeswoman. An infant from central Michigan also has died from H1N1, according to the Michigan Department of Community Health. “These deaths are among previously healthy individuals. This is not the group that the public usually thinks about as being susceptible to serious illness with influenza,” said Dr. Matt Davis, chief medical executive for the state health department and a U-M professor of pediatrics and communicable diseases and of internal medicine. Many of the hospitalized patients were transferred to U-M from other hospitals because their flu was so severe. In addition to traditional ventilators, the U-M health system offers extracorporeal membrane oxygenation, or ECMO, technology for patients who can no longer breathe on their own. The machinery supports not only the patient’s lungs, as a ventilator does, but also the heart, Davis said. “This looks like 2009, but this time we have a vaccine,” he said. At the same time, patients in less-severe condition are recuperating in other area hospitals. According to state surveillance reports, 11 Michigan hospitals — part of monitoring efforts — reported 121 hospitalizations because of flu as of Saturday. –DFP

29 Responses to Another pandemic? H1N1 sweeping across U.S. and Canada in deadly wave