Posted on August 21, 2013 by The Extinction Protocol

August 21, 2013 – JAPAN – Japan’s nuclear crisis escalated to its worst level since a massive earthquake and tsunami crippled the Fukushima plant more than two years ago, with the country’s nuclear watchdog saying it feared more storage tanks were leaking contaminated water. The U.N.’s International Atomic Energy Agency (IAEA) said on Wednesday it viewed the situation at Fukushima “seriously” and was ready to help if called upon, while nearby China said it was “shocked” to hear contaminated water was still leaking from the plant, and urged Japan to provide information “in a timely, thorough and accurate way. We hope the Japanese side can earnestly take effective steps to put an end to the negative impact of the after-effects of the Fukushima nuclear accident,” China’s Foreign Ministry said in a statement faxed to Reuters in Beijing. Japan’s Chief Cabinet Secretary Yoshihide Suga called the situation “deplorable,” and the Nuclear Regulation Authority (NRA) said it feared the disaster – the worst nuclear accident since Chernobyl a quarter of a century earlier – was “in some respects” beyond the plant operator’s ability to cope. The plant’s operator, Tokyo Electric Power Co, or Tepco, has been criticized for its failure to prepare for the disaster and has since been accused of covering up the extent of the problems at the plant. After months of denial, Tepco recently admitted the plant was leaking contaminated water into the Pacific Ocean from trenches between the reactor buildings and the shoreline. It said on Tuesday that contaminated water with dangerously high levels of radiation was leaking from a storage tank – the most serious problem in a series of recent mishaps, including power outages, contaminated workers and other leaks. The NRA said it was worried about leakage from other similar tanks that were built hastily to store water washed over melted reactors at the station to keep them cool. Water in the latest leak is so contaminated that a person standing close to it for an hour would receive five times the annual recommended limit for nuclear workers. 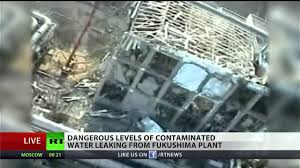 Crisis: A spokesman for the NRA said the agency plans to upgrade the severity of the crisis from a Level 1 “anomaly to a Level 3 serious incident” on an international scale for radiological releases. An upgrade would be the first time Japan has issued a warning on the International Nuclear Event Scale (INES) since the three reactor meltdowns at Fukushima in March 2011. Explosions then led to a loss of power and cooling, triggering a maximum INES Level 7 at the plant. NRA Chairman Shunichi Tanaka likened the stricken nuclear plant to a house of horrors at an amusement park. “I don’t know if describing it this way is appropriate, but it’s like a haunted house and, as I’ve said, mishaps keep happening one after the other,” he told reporters. “We have to look into how we can reduce the risks and how to prevent it from becoming a fatal or serious incident.” He said the NRA would consult with the IAEA about whether it was appropriate to assign a rating to the leakage at the plant. “The IAEA views this matter seriously and remains ready to provide assistance on request.” Each one-step INES increase represents a 10-fold increase in severity, according to a factsheet on the IAEA website. (www.iaea.org/) A Level 3 rating is assigned when there is exposure of more than 10 times the limit for workers, according to the factsheet. In an emailed comment, Andrew Sherry, director of the Dalton Nuclear Institute at the University of Manchester, said: “Though serious, this leak is a long way from the Level 7 incident we were facing in 2011. The approach taken by Tepco to drain the tank, pump leaked water to temporary storage, and protect the drainage of contaminated water to ground water, is entirely sensible. This incident highlights the need for an inspection program for these many hundreds of storage tanks, and the need to consider replacing bolted or sealed storage tanks, which were relatively quick to build, with a more robust welded design.” South Korea’s Asiana Airlines Inc said it would cancel charter flights between Seoul and Fukushima city in October due to public concerns over the radioactive water leaks. The city, around 60 kms (37 miles) from the nuclear facility and with a population of some 284,000, is a popular destination for golfers and tourists visiting nearby local hot springs and lakes. –Reuters