Posted on July 19, 2013 by The Extinction Protocol 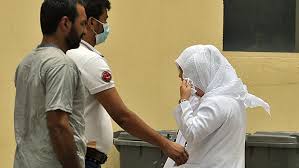 July 19, 2013 – HEALTH – Health authorities in the United Arab Emirates and Saudi Arabia have reported six new cases of the SARS-like coronavirus, the World Health Organization (WHO) said on Thursday. The latest infections of four women and two men aged between 26 and 42 bring the global total to 88 cases, including 45 deaths, the United Nations agency said in a statement. Five of the six new cases were health workers and the other was a man who came in close contact with someone who had been infected with the disease, which is known as Middle East respiratory syndrome coronavirus, or MERS, WHO said. Millions are expected to travel to Mecca in Saudi Arabia in October for the haj pilgrimage. Saudi authorities have cut the number of visas this year, citing safety concerns over expansion work at the main mosque site. The WHO is drawing up advice on travel in relation to coronavirus, to be issued in coming days. It urged health care providers to be vigilant for severe acute respiratory infections and test any recent travelers from the Middle East suffering from such infections for MERS. The global health body has set up an emergency committee of independent experts on MERS, who said on Wednesday it was not a “public health emergency of international concern” for the time being. The committee can make recommendations on travel and trade restrictions, increased disease surveillance and exchange of data. Two of the new coronavirus cases in Abu Dhabi and both cases in Saudi Arabia displayed mild symptoms. The other two in Abu Dhabi had no symptoms of the disease. Cases have also been found in Jordan, Qatar, the United Arab Emirates, Tunisia, Britain, France, Italy and Germany. –Reuters