Posted on May 2, 2013 by The Extinction Protocol 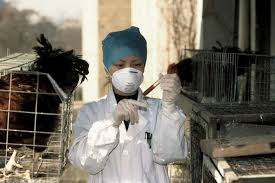 May 2, 2013 – HEALTH – A new strain of bird flu that is causing a deadly outbreak among people in China is a threat to world health and should be taken seriously, scientists said on Wednesday. The H7N9 strain has killed 24 people and infected more than 125, according to the Geneva-based World Health Organization (WHO), which has described it as “one of the most lethal” flu viruses. The high mortality rate, together with relatively large numbers of cases in a short period and the possibility it might acquire the ability to transmit between people, make H7N9 a pandemic risk, experts said. “The WHO considers this a serious threat,” said John McCauley, director of the WHO Collaborating Centre for Influenza at Britain’s National Institute for Medical Research. Speaking at a briefing in London, experts in virology said initial studies suggest the virus has several worrisome characteristics, including two genetic mutations that make it more likely to eventually spread from person to person. “The longer the virus is unchecked in circulation, the higher the probability that this virus will start transmitting from person to person,” Colin Butte, an expert in avian viruses at Britain’s Pirbright Institute, said. Of the some 125 people infected with H7N9 so far, around 20 percent have died, approximately 20 percent have recovered and the remainder are still sick. The infection can lead to severe pneumonia, blood poisoning and organ failure. “This is a very, very serious disease in those who have been infected. So if this were to become more widespread it would be an extraordinarily devastating outbreak,” Peter Openshaw, director of the center for respiratory infection at Imperial College London, told the briefing. Scientists who have analyzed genetic sequence data from samples from three H7N9 victims say the strain is a so-called “triple reassortant” virus with a mixture of genes from three other flu strains found in birds in Asia. Recent pandemic viruses, including the H1N1 “swine flu” of 2009/2010, have been mixtures of mammal and bird flu – hybrids that are likely to be milder because mammalian flu tends to make people less severely ill than bird flu. Pure bird-flu strains, such as the new H7N9 strain and the H5N1 flu, which has killed about 371 of 622 the people it has infected since 2003, are generally more deadly for people. Human cases of the H7N9 flu have been found in several new parts of China in recent days and have now been recorded in all of its provinces. Last week a man in Taiwan became the first case of the flu outside mainland China, though he was infected while travelling there. The H7N9 strain was unknown in humans until it was identified in sick people in China in March. Scientists say it is jumping from birds – most probably chickens – to people, and there is no evidence yet of the virus passing from person to person. Jeremy Farrar, a leading expert on infectious diseases and director of Oxford University’s research unit in Vietnam, said the age range of those infected so far stretched from toddlers to people in their late 80s – a range that appeared to confirm the virus is completely new to the human population. “That suggests there truly is no immunity across all ages, and that as humans we have not seen this virus before,” he said. “The response has to be calm and measured, but it cannot be taken lightly,” he said. –Reuters