Human to Human? Mystery intensifies on how H7N9 is spreading; most had no contact with poultry

Posted on April 17, 2013 by The Extinction Protocol

April 17, 2013 – BEIJING – The World Health Organization said on Wednesday that a number of people who have tested positive for a new strain of bird flu in China have had no history of contact with poultry, adding to the mystery about the virus that has killed 17 people to date. Chinese authorities have slaughtered thousands of birds and closed some live poultry markets to 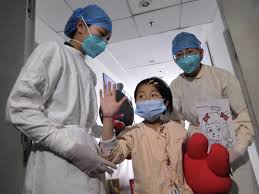 try and stem the rate of human infection, but many questions remain unsolved including whether the H7N9 strain is being transmitted between people. WHO spokesman Gregory Hartl confirmed that “there are people who have no history of contact with poultry,” after a top Chinese scientist was quoted as saying about 40 percent of those with the H7N9 flu had had no poultry contact. “This is one of the puzzles still (to) be solved and therefore argues for a wide investigation net,” Hartl said in emailed comments, though he did not know the exact percentage. Several avenues should be explored by an international team of experts going to China soon, including the possibility that the virus can be spread between people, although there is “no evidence of sustained human-to-human transmission,” Hartl said. “It might be because of dust at the wet markets, it could be another animal source beside poultry, it could also be human-to-human transmission,” he added by telephone. Wendy Barclay, a flu expert at Imperial College London, said it was likely to be very difficult to determine and rule out people’s exact exposure to poultry – and to wild birds, which could also be a possible source of infection. “The incubation time might be quite long so visiting a market even 14 days before might have resulted in infection,” she said. Previously the WHO reported two suspected family “clusters,” but later said the virus was found not to have infected anyone in the first. Tests in the second were inconclusive and experts say the poor quality samples may make it impossible to know. China has warned that the number of infections could rise from the current 77. The latest victims are from the commercial capital of Shanghai, where the majority of the cases have been found, the official Xinhua news agency said on Tuesday. China reported three new bird flu outbreaks to the World Animal Health Organization (OIE) this week, bringing the total number of places to 11, the OIE said on its website. Samples have tested positive in some poultry markets that remain the focus of investigation by China and the U.N.’s Food and Agriculture Organization. Zeng Guang, the chief scientist in charge of epidemiology at the China Disease Prevention and Control Centre (CDPCC), said about 40 percent of human victims had no clear history of poultry exposure, the Beijing News reported on Wednesday. According to a Reuters analysis of the infections, based on state media reports, only 10 of the 77 cases as of Tuesday have had contact with poultry. The CDPCC declined to comment when asked by Reuters. A study published last week showed the H7N9 strain was a so-called “triple reassortant” virus with a mixture of genes from three other flu strains found in birds in Asia. [ID:nL5N0CY2ZT]One of those three strains is thought to have come from a brambling, a type of small wild bird. “We can’t rule out that this … has passed through poultry but then been reintroduced to a wild bird population from which some spread to humans might be occurring,” Barclay said. –Reuters

5 Responses to Human to Human? Mystery intensifies on how H7N9 is spreading; most had no contact with poultry