Posted on April 4, 2013 by The Extinction Protocol 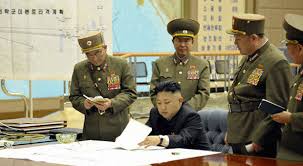 April 4, 2012 – NORTH KOREA – North Korea said it had “ratified” a merciless attack against the United States, potentially involving a “diversified nuclear strike. We formally inform the White House and Pentagon that the ever-escalating U.S. hostile policy toward the DPRK (North Korea) and its reckless nuclear threat will be smashed by the strong will of all the united service personnel and people and cutting-edge smaller, lighter and diversified nuclear strike means of the DPRK and that the merciless operation of its revolutionary armed forces in this regard has been finally examined and ratified,” a spokesman for the General Staff of the Korean People’s Army said in a statement carried by the English language service of the state news agency KCNA. –HP

Missile movement? North Korea appears to have moved a missile capable of hitting targets in South Korea and Japan to its east coast, as tensions escalate. The movement of the mid-range missile was detected by both South Korean and US intelligence, the South’s Yonhap news agency reported, citing military and government sources. “It appeared that the object was a Musudan mid-range missile,” it quoted one South Korean official as saying. “We are closely monitoring whether the North moved it with a view to actual launch or just as a show of force against the

US.” The Musudan missile was first unveiled at a military parade in October 2010 and is believed to have an intended range of around 3000km. However, it is not known to have been tested. Yonhap cited intelligence sources as saying the North might launch the missile on April 15, the birth anniversary of founding leader Kim Il-sung. The South Korean Defense Ministry declined to confirm the report, but stressed that it kept a “24-hour watch” for any potential North Korean missile launches. “We believe there is always an open possibility for a missile launch and related measures have been prepared,” ministry spokesman Wi Yong-Seop told reporters without elaborating. The United States has said it is sending ground-based missile interceptors to Guam in response to North Korean threats to strike the Pacific island and other US targets, which Defense Secretary Chuck Hagel described as a “real and clear danger.” Tensions also continued between the two Koreas over a joint industrial park, with North Korea asking companies in the Kaesong zone for a list of all South Korean personnel who wish to leave the complex in the coming days. Pyongyang told Seoul yesterday it was stopping the daily movement of South Koreans to Kaesong, which lies 10 kilometers inside North Korea and which is the last real surviving point of contact between the two countries. The North said the South Koreans in the complex could leave when they wanted, but hundreds opted to stay to keep their plants running. The potential crisis on the Korean peninsula comes after the North’s move to restart operations at its main Yongbyon nuclear complex to produce more weapons. Early this morning, in a move apparently timed to hit evening news bulletins in the US, the rogue state issued a statement saying its military had ratified plans for a nuclear strike on the US. The statement, while provocative, repeats its earlier threats and contains the usual smattering of conditional clauses and bombast. However, it was issued in the name of the Korean People’s Army’s general staff, giving it added weight in the eyes of observers. “We formally inform the White House and Pentagon that the ever-escalating US hostile policy toward the DPRK and its reckless nuclear threat will be smashed by the strong will of all the united service personnel and people and cutting-edge smaller, lighter and diversified nuclear strike means of the DPRK and that the merciless operation of its revolutionary armed forces in this regard has been finally examined and ratified,” the statement said. Overnight, the Pentagon said it would deploy its Terminal High Altitude Area Defense (THAAD) system to Guam in the coming weeks. The THAAD system includes a truck-mounted launcher, interceptor missiles, an AN/TPY-2 tracking radar and an integrated fire control system. –The Australian