Posted on March 29, 2013 by The Extinction Protocol

March 29, 2013 – NORTH KOREA – North Korea’s leader approved a plan to prepare standby rockets to hit U.S. targets, state media said Friday, after American stealth bombers carried out a practice mission over South Korea. In a meeting with military leaders early Friday, Kim Jong Un “said he has judged the time has come to settle accounts with the U.S. imperialists in view of the prevailing situation,” the state-run KCNA news agency reported. The rockets are aimed at U.S. targets, including military bases in the Pacific and in South Korea, it said. “If they make a reckless provocation with huge strategic forces, (we) should mercilessly strike the U.S. mainland, their stronghold, their military bases in the operational theaters in the Pacific, including Hawaii and Guam, and those in South Korea,” KCNA reported. North Korean state media carried a photo of Kim meeting with military officials Friday. In the photo, the young leader is seated, leafing through documents with four uniformed officers standing around him. On the wall behind them, a map titled “Plan for the strategic forces to target mainland U.S.” appears to show straight lines stretching across the Pacific to points on the continental United States. South Korea and the United States are “monitoring any movements of North Korea’s short, middle and middle- to long-range missiles,”  South Korean Defense Ministry Spokesman Kim Min-seok said Friday. Kim’s regime has unleashed a torrent of threats in the past few weeks, and U.S. officials have said they’re concerned about the recent rhetoric. “I think their very provocative actions and belligerent tone, it has ratcheted up the danger, and we have to understand that reality,” Defense Secretary Chuck Hagel said Thursday at a news briefing. Some observers have suggested that Washington is adding to tensions in the region by drawing attention to its displays of military strength on North Korea’s doorstep, such as the flights by the B-2 stealth bombers. Hagel argued against that assertion. “We, the United States and South Korea, have not been involved in provocating anything,” he said. “We, over the years, have been engaged with South Korea on joint exercises. The B-2 flight was part of that.” Washington and its allies “are committed to a pathway to peace,” Hagel said. “And the North Koreans seem to be headed in a different direction here.” But Pentagon spokesman George Little said it was important to remain calm and urged North Korea to “dial the temperature down.” – CNN

Russia warns situation spiraling out of control: Russia warned on Friday that a flare-up in tensions between North Korea and the United States could get out of control, urging all sides involved in the standoff to refrain from muscle-flexing. “We can simply see the situation getting out of control, it would spiral down into a vicious circle,” Foreign Minister Sergei Lavrov told reporters, warning all parties against “unilateral actions.” –Inquirer 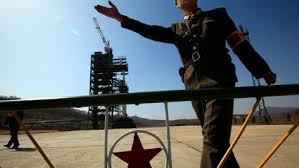 Increased activity at missile sites: Following a report that North Korea was placing its rocket units on standby to attack U.S. military bases, South Korea’s Yonhap news agency announced that South Korea had detected increased activity at the north’s missile sites. Kim signed the order at a meeting of top generals and said the time had come to “settle accounts” with the U.S., the Korean Central News Agency (KCNA) reported. Yonhap quoted a military source as saying, “Sharply increased movements of vehicles and soldiers have been detected recently at North Korea’s mid- and long-range missile sites.” On Thursday, the U.S. flew two stealth bombers on practice runs over South Korea, showing force after several threats by North Korea. Swiftly thereafter, KCNA reported that Kim had “finally signed the plan on technical preparations of strategic rockets of the KPA, ordering them to be standby for fire so that they may strike any time the U.S. mainland, its military bases in the operational theaters in the Pacific, including Hawaii and Guam, and those in South Korea.” –Huffington Post

North Korea declares ‘state of war’ – North Korea said on Saturday it was entering a “state of war” with South Korea in a continuing escalation of angry rhetoric directed at Seoul and Washington, but the South brushed off the statement as little more than tough talk. The two Koreas have been technically in a state of war for six decades under an armistice that en

ded their 1950-53 conflict. Despite its threats few people see any indication Pyongyang will risk a near-certain defeat by re-starting full-scale war. “From this time on, the North-South relations will be entering the state of war and all issues raised between the North and the South will be handled accordingly,” a statement carried by the North’s official KCNA news agency said. KCNA said the statement was issued jointly by the North’s government, ruling party and other organizations. There was no sign of unusual activity in the North’s military or anything to suggest an imminent aggression, a South Korean defense ministry official said. North Korea has been threatening to attack the South and U.S. military bases almost on a daily basis since the beginning of March, when U.S. and South Korean militaries started routine drills. –Reuters

42 Responses to North Korea puts rockets on standby to ‘mercilessly strike’ the U.S.