Nightmare unfolding in Cyprus, as plan hatched to seize 25% of large bank deposits

Posted on March 23, 2013 by The Extinction Protocol 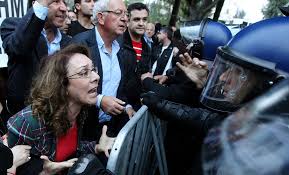 March 23, 2013 – CYPRUS – Cyprus said on Saturday it was looking at seizing a quarter of the value of big deposits at its largest bank, as it races to raise the funds for a bailout from the European Union and to avert financial collapse. Finance Minister Michael Sarris said “significant progress” had been made in talks in Nicosia with officials from the European Union, European Central Bank and International Monetary Fund. He confirmed discussions were centered on a possible levy of around 25 percent on holdings of over 100,000 euros (about $130,000) at Bank of Cyprus, and expressed hope that a package could be ready by the end of the day for approval by parliament. Cyprus faces a Monday deadline to clinch a bailout deal with the EU or the European Central Bank says it will cut off emergency cash to the island’s over-sized and stricken banks, spelling certain collapse and a potential exit from Europe’s single currency. Amid signs of momentum, Cypriot and EU officials said Cypriot President Nicos Anastasiades was expected in Brussels on Sunday to meet EU leaders including Council President Herman Van Rompuy and Commission President Jose-Manuel Barroso, as well as IMF Managing Director Christine Lagarde and the head of the ECB, Mario Draghi. Protesters in Cyprus gather outside parliament as government officials try to strike a bailout deal with the European Union. NBCNews.com’s Dara Brown reports. Van Rompuy and Barroso canceled a planned EU-Japan summit in Tokyo to tend to the Cyprus saga and euro zone officials told Reuters that the bloc’s 17 finance ministers would meet on Sunday afternoon. “Significant progress has been made in the direction of getting a deal, at least at the troika level,” Sarris told reporters. He said a number of issues were still outstanding, but that a package could be ready “late this afternoon or early evening” for approval by parliament. Arriving at the troika talks, Andreas Artemi, chairman of Bank of Cyprus, was asked if a 25 percent haircut was being considered on uninsured deposits. He replied: “I don’t know that yet.”

A senior lawmaker told Reuters earlier on Saturday that parliament was not expected to convene until after the meeting of euro zone finance ministers on Sunday afternoon, taking the crisis right down to the wire. The same legislature on Tuesday angrily threw out a proposed levy on bank deposits, designed to raise the 5.8 billion euros the EU wants in return for a 10 billion euro ($13 billion) bailout. The tax is unprecedented in Europe’s handling of a debt crisis that has spread from Greece, to Ireland, Portugal, Spain and Italy. It is by no means certain the tiny legislature will accept the measure this time around. The turnaround came after Russia rebuffed Cypriot entreaties to help its banks, where Russian citizens and other foreigners have billions of euros at stake. Significantly, the latest proposal would spare small depositors, who were outraged by the original plan to hit small holdings as well as large accounts, many of them held by rich foreigners including Russians. Cypriot leaders fear the damage the levy would do to the country’s offshore banking industry. The tottering banks hold 68 billion euros ($88 billion) in deposits, including 38 billion ($49 billion) in accounts of more than 100,000 euros – enormous sums for an island of 1.1 million people which could never sustain such a big financial system on its own. But much of the banks’ capital was wiped out by investments in Greece, the epicenter of the euro zone debt crisis. Racing to placate its European partners, Cypriot lawmakers voted in late-night session on Friday to nationalize state pensions and split failing lenders into good and bad banks. They also gave the government powers to impose capital controls on banks, anticipating a flood of money from the island when banks are due to reopen on Tuesday after more than a week of lockdown. The plan to nationalize semi-state pension funds has, however, met with resistance, particularly from Germany which made clear that tapping pensions could be even more painful for ordinary Cypriots than a deposit levy. The pace of the unfolding drama has stunned Cypriots, who have besieged bank cash machines since the levy was first mooted a week ago. “Our so-called friends and partners sold us out,” said Marios Panayides, 65, a protester at the parliament. “They have completely abandoned us on the edge of an abyss.” –MSNBC

Nightmare scenario: Like the Corvair, the banking system in Cyprus is built to fail – to spin out of control at a moment’s notice. But so is every banking system around the globe, including our own. And when a country’s banking system fails, its economy flips from a good path to a bad one – in economics speak, from a good to a bad equilibrium. Cyprus is a small country. Still, the failure of its banks could trigger massive bank runs in Greece. After all, if the European Central Bank is abandoning Cypriot depositors, they may abandon Greek depositors next. A run on Greek banks could then spread to Portugal, Ireland, Spain, and Italy and from there to Belgium and France and, you get the picture, to other countries around the globe, including, drum roll, the U.S. Every bank in each of these countries has made promises they can’t keep were push come to shove, i.e., if all depositors demand their money back immediately. –Forbes

30 Responses to Nightmare unfolding in Cyprus, as plan hatched to seize 25% of large bank deposits