Posted on January 6, 2013 by The Extinction Protocol 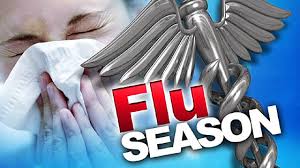 January 6, 2013 – HEALTH – The U.S. has been hit with a particularly aggressive early flu season this year with widespread reports of the illness across the country, hospitalizing 2,257 people and leaving 18 children dead before the end of 2012. And health officials say the numbers haven’t even peaked yet. ‘I think we’re still accelerating,’ Tom Skinner, a Center for Disease Control and Prevention spokesman, told reporters. The latest figures from the CDC show 29 states and New York City reporting high levels of flu activity, up from 16 states and New York City just one week prior. Overall, 41 states reported cases. ‘It’s about five weeks ahead of the average flu season,’ said Lyn Finelli, lead of the surveillance and response team that monitors influenza for the CDC’s National Center for Immunization and Respiratory Diseases. ‘We haven’t seen such an early season since 2003 to 2004.’ During that flu season, Joe Lastinger’s daughter Emily, 3, died only five days after coming down with the flu in late January. ‘That was the first really bad season for children in a while,’ said Lastinger, 40. ‘For whatever reason that’s not well understood, it affected her and it killed her.’ In that season, illnesses peaked in early to mid-December, with flu-related pneumonia and deaths peaking in early January. That season was considered a ‘moderately severe’ season for flu, and ended in mid-February. It’s still too early to tell how bad this year’s flu season will get. –Daily Mail

Illinois sees rise in cases: NAPERVILLE, Ill. (AP) – Emergency rooms are seeing a spike in patients as Illinois experiences one of the biggest flu outbreaks in the nation. The (Arlington Heights) Daily Herald reports the typical flu season peaks in mid- to late-January and carries into late March. But health officials say major cases began appearing as early as Thanksgiving. Mary Anderson is the infection control manager at Edward Hospital. She says the hospital normally sees an average of 200 cases per season. But as of last week the hospital already has seen more than 260 confirmed cases. Officials say getting a flu shot could be the easiest way to avoid the emergency room. They also recommend hashing hands regularly for at least 15 seconds and keeping a distance from others. –WLSAM