Posted on December 16, 2012 by The Extinction Protocol 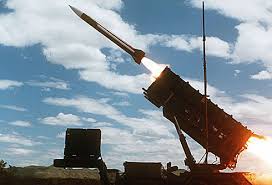 December 16, 2012 – TURKEY – Iran’s armed forces chief of staff on Saturday warned Turkey over its plans to deploy US-made Patriot missiles, saying the move was part of a Western plot to “create a world war. The Patriot (missiles) are threatening. Each one of them is a black dot on the map, (setting the stage) to create a world war,” General Hassan Firouzabadi told the top brass at a military college, ISNA news agency reported. “The Western countries seeking to deploy the missile batteries on the Turkey-Syria border are devising plans for a world war. This is very dangerous for everyone, and even for the future of Europe,” he said. “A veteran military man and analyst can easily see this and predict the future.” NATO has approved Turkey’s request for Patriot missiles to bolster its border defenses amid tensions with the regime of Syrian President Bashar al-Assad. Germany, the Netherlands and the United States have agreed to provide the missile batteries, which would come under NATO command. But both Russia and Iran, the most powerful allies of the Assad regime, are opposed to the move. In August, General Firouzabadi drew the ire of Ankara after he predicted the turmoil in Syria would spill into Turkey whose government he accused of aiding the U.S. in achieving “belligerent objectives.” And last November, another top Iranian commander said Tehran would target NATO’s missile shield in Turkey if it came under military attack. Iran’s foreign ministry later moved to dismiss the remarks, saying they were the “personal views” of military commanders.  –France 24