Posted on December 14, 2012 by The Extinction Protocol 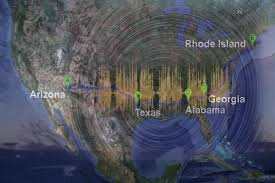 December 14, 2012 – GEORGIA – Over a period of two days last week, the Columbia County Emergency Management Agency was flooded with calls with reports from residents hearing loud booms. And as of Tuesday at 12:17 Monday afternoon, the calls poured in again. EMA Director Pam Tucker says some callers even say their house was shook by the blast. “Over the last 24 hours, we’ve had numerous reports. They come email, they call 311, they call to us, Facebook, different people,” Tucker said. Some point at quarry blasting for the noises, but Tucker says it’s a state law for them to notify her of a scheduled blasting and there wasn’t a demolition around the time the calls started Monday. “We haven’t been able to find anything in the areas where we’re getting the reports from that would really identify, specifically, that it is tannerite being blown up or anything like that,” she added. And Columbia County isn’t the only place of the hearings of unusual thunder-like noises. “There’s a lot of things on the internet that talk about mysterious booms happening other places so, they talk about it could be talking about methane gas that has seeped somehow into the earth and that’s along the coast from the gulf that would be the reason for the booms in Arizona, all the way through Georgia,” Tucker also said. –NBC26