Posted on November 27, 2012 by The Extinction Protocol 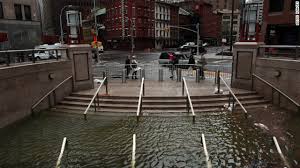 November 27, 2012 – NEW YORK – Superstorm Sandy ran up a super bill of $42 billion across New York, causing more damage than the infamous Hurricane Katrina, New York Governor Andrew Cuomo said Monday, appealing for federal emergency funds. Cuomo told a news conference that Sandy’s impact had by some measures been worse than Katrina, which caused devastation along the US Gulf Coast in 2005. Although Katrina’s death toll at 1,833 was far higher than the approximately 110 killed during last month’s hurricane-strength Sandy, the damage to property and businesses was worse this time round, he said. The total bill in New York and neighboring New Jersey was “62, 61 billion dollars,” Cuomo estimated, although that number seemed sure to rise when including extra funds needed for protection against future storms. In New York state alone, Cuomo said the total cost of recovery work came to $32.8 billion, with another $9.1 billion in prevention expenses. Footing that bill would “incapacitate” New York’s budget, Cuomo said, urging Washington to come to the rescue with federal aid. Earlier, New York City Mayor Michael Bloomberg said America’s biggest city had suffered $19 billion in Sandy-related costs. The Big Apple “will struggle to recover in the long term unless expedited federal funding is supplied,” Bloomberg said. The October 29 hurricane flooded the subway train system, damaged tens of thousands of houses in the New York area, knocked out electricity in swaths of the city for days, and prompted severe fuel shortages. Among the storm’s prominent victims was the Statue of Liberty, which had only just reopened after a year’s refurbishments and is now to be closed again for at least the remainder of 2012. The National Park Service said on its website that “a projected reopening date has not yet been established.” According to the mayor, the net repair bill from the storm falls to $9.8 billion once private insurance and already pledged Federal Emergency Management Agency aid are factored in. But “federal legislative action will be required to address the budget gap that will result once available FEMA funds and insurance proceeds are drawn down,” he said. –Space Daily