Posted on October 17, 2012 by The Extinction Protocol 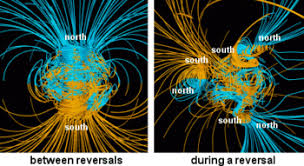 October 17, 2012 – GEOLOGY – An extremely brief reversal of the geomagnetic field, climate variability and a supervolcanic eruption. 41,000 years ago, a complete and rapid reversal of the geomagnetic field occurred. Magnetic studies of the GFZ German Research Centre for Geosciences on sediment cores from the Black Sea show that during this period, during the last ice age, a compass at the Black Sea would have pointed to the south instead of north. Moreover, data obtained by the research team formed around GFZ researchers Dr. Norbert Nowaczyk and Prof. Helge Arz, together with additional data from other studies in the North Atlantic, the South Pacific and Hawaii, prove that this polarity reversal was a global event. Their results are published in the latest issue of the scientific journal “Earth and Planetary Science Letters.” What is remarkable is the speed of the reversal: “The field geometry of reversed polarity, with field lines pointing into the opposite direction when compared to today’s configuration, lasted for only about 440 years, and it was associated with a field strength that was only one quarter of today’s field,” explains Norbert Nowaczyk. “The actual polarity changes lasted only 250 years. In terms of geological time scales, that is very fast.” During this period, the field was even weaker, with only 5% of today’s field strength. As a consequence, the Earth nearly completely lost its protection shield against hard cosmic rays, leading to a significantly increased radiation exposure. This is documented by peaks of radioactive beryllium (10Be) in ice cores from this time, recovered from the Greenland ice sheet. 10Be as well as radioactive carbon (14C) is caused by the collision of high-energy protons from space with atoms of the atmosphere. The polarity reversal now found with the magnetisation of Black Sea sediments has already been known for 45 years. It was first discovered after the analysis of the magnetisation of several lava flows near the village Laschamp near Clermont-Ferrand in the Massif Central, which differed significantly from today’s direction of the geomagnetic field. Since then, this geomagnetic feature is known as the ‘Laschamp event.’ However, the data of the Massif Central represent only some point readings of the geomagnetic field during the last ice age, whereas the new data from the Black Sea give a complete image of geomagnetic field variability at a high temporal resolution. Besides giving evidence for a geomagnetic field reversal 41,000 years ago, the geoscientists from Potsdam discovered numerous abrupt climate changes during the last ice age in the analyzed cores from the Black Sea, as it was already known from the Greenland ice cores. This ultimately allowed a high precision synchronization of the two data records from the Black Sea and Greenland. The largest volcanic eruption on the Northern hemisphere in the past 100 000 years, namely the eruption of the super volcano 39400 years ago in the area of today’s Phlegraean Fields near Naples, Italy, is also documented within the studied sediments from the Black Sea. The ashes of this eruption, during which about 350 cubic kilometers of rock and lava were ejected, were distributed over the entire eastern Mediterranean and up to central Russia. These three extreme scenarios, a short and fast reversal of the Earth’s magnetic field, short-term climate variability of the last ice age and the volcanic eruption in Italy, have been investigated for the first time in a single geological archive and placed in precise chronological order. –Science Codex