Posted on October 8, 2012 by The Extinction Protocol

October 8, 2012 – NEW YORK – “Lions and tigers and bears, oh my!” Those creatures  had Dorothy worried on the yellow brick road in “The Wizard of  Oz” – and now you may need to worry about seeing them and other large carnivores in your backyard, an Ohio State University researcher says. OK, there shouldn’t be any tigers – they aren’t found in the wild in North America – but lions (mountain), bears, wolves and coyotes are finding urban areas to be just right for a comfortable existence, says Stan Gehrt, an associate professor of environment and natural resources. Gehrt says coyotes are leading the urban invasion by formerly rural carnivores. “The coyote is the test case for other animals. Raccoons, skunks, foxes – they’ve already been able to penetrate the urban landscape pretty well. The coyote is the most recent and largest,” Gehrt said in a university press release. One pack of coyotes has established a territory and is thriving about five miles from Chicago’s O’Hare International Airport, the third busiest airport in the country, according to Budget Travel. “That’s an indication that they don’t have to go far to find food and water. They’re finding everything they need right there, in the suburbs of Chicago,” Gehrt said. And he said the urban environments may be even better than rural ones for the coyotes, with pups surviving in urban areas at five times the rate they do in rural settings. “They’re so adaptable and so opportunistic,” Gehrt said. “In adjusting to urban life, they may change dietary items and habitat use, and become nocturnal, whereas in the country they’re active day and night. But with other things, they don’t change at all. Here, they’re able to maintain their social structure, territorialism, packs and mating system, even in the face of all these challenges of trying to live among 9 million people.” In an earlier release, Gehrt said one trait that may be helping coyotes thrive in urban areas is their monogamy, which means dads are around to help raise the kids. The urban coyotes pose little danger to humans, Gert said, and can be easily scared off by yelling at them or throwing a rock at them. –CNN 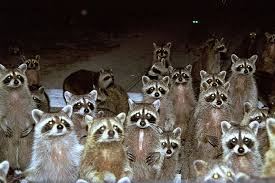 Raccoons invade New York:  A turf battle of sorts is taking place in some neighborhoods. Raccoons are invading. They’re getting into garbage cans, backyards and even breaking into homes. And what’s more, these resourceful raccoons are outsmarting the most determined of trappers, CBS 2’s Dave Carlin reported. Clinton Hill, Brooklyn resident Susan DeBrango snapped pictures of the suspects, their faces masked, trying to get inside her home. “They are adorable but not in your backyard when they impact your life,” DeBrango said. “When he saw at me he stood up on two legs and hissed at me.” They are getting more brazen on Washington Avenue, rummaging through trash, and running right up to neighbors. One even went face-to-face with Barbara Mattocks on her own front stoop. “I don’t want that feeling ever again. I was petrified,” Mattocks said. It’s gotten so bad, one 3-year-old Maltese named ‘Snowball,’ who used to love to play outside, is now a prisoner in his own home, according to his owner. “He refuses to go out in the yard,” Mattocks said. Neighbors said they called 3-1-1 but were told the city will not respond unless the raccoons appear disoriented and potentially rabid. So, the residents chipped in for the services of a humane trapper. However, in three weeks of setting out cat food in cages not a single raccoon was caught. Raccoon experts said they are not surprised. “They are extremely intelligent animals. In terms of trying to trap them, once they’ve been trapped once they’ll know not to go in that trap again,” said Rich Weddle of the Animal Husbandry Department at Liberty Science Center. Weddle said raccoons can spread rabies and distemper, which is a concern for dogs, not to mention parasites, fleas and ticks. –CBS

Enter at your own risk: Authorities in Detroit, Michigan have been posting signs and distributing flyers warning residents to be on alert because of the lack of police protection in the city. Due to the major rise of crime and violence, including homicides, authorities have designated the city of Detroit as a “War Zone.” The Detroit Police Department has said the city is too dangerous to enter and is warning would-be-visitors to enter at their own risk. The police department has lost more than 1,000 officers in the last 10 years. Amid the rise of violence within the city, more officers and fire fighters are leaving. Detroit is the nation’s most violent city and the homicide rate is the highest in the country. –Westmoreland Times