Posted on September 24, 2012 by The Extinction Protocol 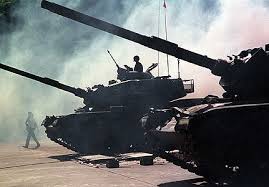 September 24, 2012 – IRAN – Iran could launch a pre-emptive strike on Israel if it was sure the Jewish state was preparing to attack it, a senior commander of its elite Revolutionary Guards was quoted as saying on Sunday. Amir Ali Hajizadeh, a brigadier general in the Islamic Revolutionary Guard Corps, made the comments to Iran’s state-run Arabic language Al-Alam television. “Iran will not start any war but it could launch a pre-emptive attack if it was sure that the enemies are putting the final touches to attack it,” Al-Alam said, paraphrasing the military commander. Hajizadeh said any attack on Iranian soil could trigger “World War Three.” We cannot imagine the Zionist regime starting a war without America’s support. Therefore, in case of a war, we will get into a war with both of them and we will certainly get into a conflict with American bases,” he said. “In that case, unpredictable and unmanageable things would happen and it could turn into a World War Three.” Prime Minister Benjamin Netanyahu has made increasing hints that Israel could strike Iran’s nuclear sites and has criticized U.S. President Barack Obama’s position that sanctions and diplomacy should be given more time to stop Iran getting the atomic bomb. Tehran denied it is seeking weapons capability and says its atomic work is peaceful, aimed at generating electricity. “The Zionist entity is militarily incapable of confronting Iran … the circumstances of the region do not enable it to wage war tomorrow or even in the near future,” Hajizadeh said. “Our response will exceed their expectations,” he said. “Their assessment of our missile capabilities is wrong. Our response will not only be missiles.” –Reuters