Posted on September 1, 2012 by The Extinction Protocol 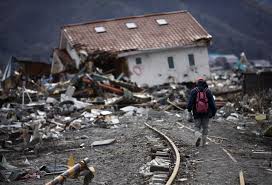 September 1, 2012 – TOKYO – Japan’s government on Wednesday unveiled a worst case disaster scenario that warned a monster earthquake in the Pacific Ocean could kill over 320,000 people, dwarfing last year’s quake-tsunami disaster. Tokyo’s casualty toll estimate was based on a catastrophic scenario in which a powerful undersea quake of about 9.0 magnitude sparked a giant tsunami that swamps Japan’s coastline south of Tokyo. The Cabinet Office’s hypothetical disaster would see the quake strike at nighttime during the winter with strong winds helping unleash waves that reach 34-metre (110 feet), sweeping many victims away as they slept. Many of the estimated 323,000 victims would be drowned by the tsunami, crushed under falling objects or in fires sparked by the disaster, it said. On March 11 last year, a 9.0 magnitude quake struck seismically-active Japan in the early afternoon, triggering tsunami waves that reached 20 meters. About 19,000 were killed or remain missing while the tsunami slammed into the Fukushima Daiichi nuclear plant, sending reactors into meltdown and sparking the worst atomic crisis in a generation. “As long as we live in Japan, we cannot deny the possibility of a huge earthquake and tsunami,” Masaharu Nakagawa, state minister for disaster management, told reporters Wednesday. The report was designed to paint a worst-case scenario and help officials boost their disaster preparedness. An estimate in 2003 assumed casualties of about 25,000 people, but that scenario envisioned a less powerful 8.4 magnitude quake striking a smaller area. The deadliest quake in Japanese history struck the central Kanto region in 1923, killing at least 100,000 people. –Terra Daily