Posted on August 11, 2012 by The Extinction Protocol

August 11, 2012 – TEHRAN — Strong earthquakes with magnitudes of 6.3 and 6.4 struck on Saturday near the northwestern Iranian city of Tabriz, Tehran University’s Seismological Centre said. The strong earthquakes were about 11 minutes apart, and created numerous aftershocks. Iranian news agencies made no immediate mention of casualties or damage, but reports were preliminary. The quake hit at 4:43 pm (1223 GMT) with an epicentre about 60 kilometres (40 miles) northeast of Tabriz, at a depth of 10 kilometres (six miles), according to the Seismological Centre. The US Geological Survey, which monitors earthquakes worldwide, confirmed the temblor near the city which has a population of 1.5 million people. It measured 6.2 on the Moment Magnitude Scale used for quakes stronger than 5. –AFP

Armenia shaken by quakes:  Shocks were registered in the territory of Armenia. As “Armenpress” reports according to the data of the European-Mediterranean Seismological Service a strong earthquake was registered in Iran 63 km to the east of the city Tavriz on 60 km depth. Shocks were felt in different administrative regions, also in Region Syunik. The Crisis Management Center of the Armenian Ministry of Emergency Situations informed that shocks were registered in the whole republic territory. Details are being specified. –Armen press 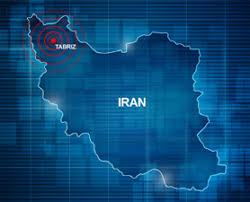 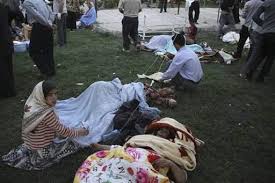 Hospitals are overwhelmed from the number of injured, said to be around 5,000 and rising. Bodies are being placed in make-shift warehouses, until they can be buried. Meanwhile, the flurry of aftershocks continue to unsettle the region.

Distressed and suffering: Twin earthquakes in Iran have killed at least 250 people and injured over 2,000, Iranian state television said on Sunday, after thousands spent the night outdoors after their villages were leveled and homes damaged in the country’s northwest. Images broadcast on the main news channel showed dozens of families sleeping on blankets laid out on the ground in parks. Some were crying, others shivering from chilly weather in the mountainous region hit by the quake, near neighboring Azerbaijan. Over a thousand rescuers worked through the night to free people trapped under rubble and to reach some of the more remote villages affected. Television also showed people being evacuated on stretchers, while others underwent treatment for broken limbs and concussions on hospital beds. By early afternoon on Sunday, state television was reporting that search operations had ceased. Hundreds of tents had been set up to house the homeless, it added. The U.S. Geological Survey reported that Saturday’s first quake at 4:53 p.m. (1223 GMT) had a magnitude of 6.4 and struck 37 miles northeast of the city of Tabriz at a depth of 6.2 miles. State TV quoted local Crisis Committee chief Khalil Saei as saying the epicenter was a region between the towns of Ahar and Haris, about 200 miles northwest of the capital, Tehran. The second quake, with a magnitude of 6.3, struck 11 minutes later, the USGS reported. Its epicenter was 29 miles northeast of Tabriz at a depth of 6.1 miles. –LA Times

Death toll expected to rise:  6.3 and 6.4 -magnitude earthquakes killed at least 87 people and injured over 400 others in northwestern Iran on Saturday, state TV said. Iran’s main news channel said the quake hit the towns of Ahar, Haris and Varzaqan in East Azerbaijan province at 4:53 p.m. local time (GMT 12:23), also damaging hundreds of homes. The TV quoted Khalil Saei, local Crisis Committee chief, as saying that 30 people were killed in Ahar, 40 in Varzaqan and 17 others in Haris. The broadcast said at least 60 villages sustained damage ranging from 50 to 80 percent, while 4 other villages had been totally leveled to the ground. The TV said at least three aftershocks — measuring 6.0, 4.7 and 4.1 — jolted the same area and were felt in a wide region near the Caspian Sea. –Time