Italy begins drilling into super-volcano that, if erupts, could kill millions

Posted on August 4, 2012 by The Extinction Protocol

August 4, 2012 – ITALY – Across the bay of Naples from Pompeii, where thousands were incinerated by Mount Vesuvius in 79 AD, lies a hidden ‘super volcano’ that could kill millions in a catastrophe many times worse, scientists say. The boiling mud and sulphurous steam holes of the area west of Naples known as the Campi Flegrei or Phlegraean Fields, from the Greek word for burning, are a major tourist attraction. But the zone of intense seismic activity, which the ancients thought was the entrance to hell, also could pose a danger of global proportions with millions of people literally living on top of a potential future volcanic eruption. ‘These areas can give rise to the only eruptions that can have global catastrophic effects comparable to major meteorite impacts,’ said Giuseppe De Natale, head of a project to drill deep under the earth to monitor the molten ‘caldera.’ Benedetto De Vivo, a geochemist at Naples University, has said the drilling could cause an explosion. The Naples city council blocked the project in 2010 but it resumed on the site of an abandoned steel mill at Bagnoli, west of Naples, late last month after the recently elected new mayor, Luigi De Magistris, gave the go-ahead. De Natale scoffed at the objections, saying that the drilling was perfectly safe and that similar probes had been sent down by mining projects looking for sources of thermal energy in the 1980s and earlier. “There were dozens of drillings in the past, with much less secure instruments for industrial motives and nobody said anything,” he said. He added that those raising objections we 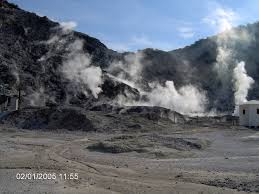 re not experts on drilling and that their suggestions of potential earthquakes or escapes of magma or liquid molten rock had been exaggerated by the local press. “Some of the things they suggested are laughable,” he said, adding that the project’s priority will be scientific knowledge and safety of the local population rather than industrial exploitation as in the past. “We believe the security of millions of people deserves the most powerful methods of inquiry without thinking too much about the economic aspect,” he said. He added that drilling is the only way to discover the geological history of the area because successive eruptions buried previous evidence. The probe has already found volcanic rock from a major eruption 15,000 years ago. De Natale’s team has begun drilling a pilot hole at the Bagnoli site, where a long jetty built to load steel is used by joggers and courting couples enjoying the spectacular Neapolitan sunsets. The pilot hole is aimed not only at studying the stratification of the area but to establish a deep geological observatory with new instruments which De Natale says are many times more sensitive than those in the past. “This will increase by a thousand or 10,000 times our ability to detect small episodes that are precursors of future eruptions,” he said. –Reuters

35 Responses to Italy begins drilling into super-volcano that, if erupts, could kill millions