Posted on June 27, 2012 by The Extinction Protocol 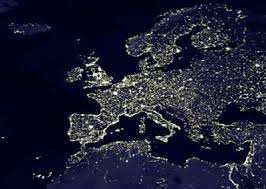 June 27, 2012 – EUROPE – The fact that Europe’s top central banker is no longer willing to rule out a return to the old national currencies shows how serious the situation is. Until recently, it was seen as a sign of political correctness to not even consider the possibility of a euro collapse. But now that the currency dispute has escalated in Europe, the inconceivable is becoming conceivable, at all levels of politics and the economy. Investment experts at Deutsche Bank now feel that a collapse of the common currency is “a very likely scenario.” German companies are preparing themselves for the possibility that their business contacts in Madrid and Barcelona could soon be paying with pesetas again. And in Italy, former Prime Minister Silvio Berlusconi is thinking of running a new election campaign, possibly this year, on a return-to-the-lira platform. Nothing seems impossible anymore, not even a scenario in which all members of the currency zone dust off their old coins and bills — bidding farewell to the euro, and instead welcoming back the guilder, deutsche mark and drachma. It would be a dream for nationalist politicians, and a nightmare for the economy. Everything that has grown together in two decades of euro history would have to be painstakingly torn apart. Millions of contracts, business relationships and partnerships would have to be reassessed, while thousands of companies would need protection from bankruptcy. All of Europe would plunge into a deep recession. Governments, which would be forced to borrow additional billions to meet their needs, would face the choice between two unattractive options: either to drastically increase taxes or to impose significant financial burdens on their citizens in the form of higher inflation. A horrific scenario would become a reality, a prospect so frightening that it ought to convince every European leader to seek a consensus as quickly as possible. But there can be no talk of consensus today. On the contrary, as the economic crisis worsens in southern Europe, the fronts between governments are only becoming more rigid. The Italians and Spaniards want Germany to issue stronger guarantees for their debts. But the Germans are only willing to do so if all euro countries transfer more power to Brussels — steps the southern member states, for their part, don’t want to take. German Chancellor Angela Merkel has come out stronger than ever against euro-zone debt sharing, telling a group of parliamentarians that there would be no euro bonds “as long as I live.” Her tough stance guarantees conflict with Italian Prime Minister Mario Monti at this week’s pivotal EU summit in Brussels. –Spiegel – S

Europe fiddles around while Italy burns: Today Italy had a rather critical Bill auction in which it sold €9 billion in debt due six months from today. Obviously, since the maturity is well inside of the LTRO, the auction itself was rather meaningless from a risk standpoint. Still, the good news is that Italy managed to place the entire maximum amount targeted. The bad news: it cost Italy more to raise 6 months of debt, or 2.957%, than it costs the US to borrow for 30 years (2.70%).  What next? Just because ZIRP is so 2009 (and will be until the end of central planning as the Fed cannot afford to hike rates ever again), the ECB is now contemplating something far more drastic: charging depositors for the privilege of holding money. Enter NIRP, aka Negative Interest Rate Policy. –Zero Hedge