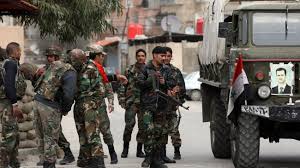 May 26, 2012 – SYRIA – A Russian cargo ship loaded with weapons is en route to Syria and due to arrive at a Syrian port this weekend, Al Arabiya television said in a report that Western diplomats in New York described on Friday as credible. Syria is one of Russia’s top weapons customers. The United States and European Union have suggested the U.N. Security Council should impose an arms embargo and other U.N. sanctions on Syria for its 14-month assault on a pro-democracy opposition determined to oust Syrian President Bashar al-Assad. But Russia, with the support of fellow veto power China, has prevented the council from imposing any U.N. sanctions on Syria and has refused to halt arms sales to Damascus. “Al Arabiya have learned that a Russian cargo ship carrying a large amount of weapons plans to unload its cargo in the Syrian port of Tartus,” the broadcaster said on its website on Thursday. The report said the ship left a Russian port on May 6 and cited a “Western source” as saying that it will dock at Tartus on Saturday. “The ship is trying to conceal its final destination in a suspicious way,” Al Arabiya said. Western diplomats and officials said the report was credible. In a letter to the U.N. Security Council, Secretary-General Ban Ki-moon said he had seen reports of countries supplying arms to the government and rebels. He urged states not to arm either side in the Syrian conflict. “Those who may contemplate supporting any side with weapons, military training or other military assistance, must reconsider such options to enable a sustained cessation of violence,” he said. Russia has defended its weapons deliveries to Syria in the face of Western criticism, saying government forces need to defend themselves against rebels receiving arms from abroad. Damascus says Qatar, Saudi Arabia and Libya are among the countries helping the rebels. –Reuters

Unending nightmare: Government troops shelled a string of villages in central Syria before pro-regime thugs swept through the area, shooting people in the streets and in their homes in attacks that killed more than 90 people, activists said Saturday. The assault on Houla, an area northwest of the central city of Homs, is one of the bloodiest single events in Syria’s 15-month-old uprising. Activists from the region said regime forces peppered Houla with mortars following a large anti-regime protest on Friday. After the bombardment, pro-government thugs known as shabiha raided the villages, killing men on the streets and stabbing women and children in their houses. Amateur videos posted online showed scores of dead covered in sheets and blankets, some covered with chunks of ice to preserve then until burial. One video showed 14 dead children lined up on the ground, shoulder to shoulder. Another had at least a dozen more, some with holes in their heads and faces, lying on what appears to be the floor of a mosque. The Syrian government blamed the massacre on “armed terrorist groups” but provided no details or death toll. The killings strike a stiff blow to an international peace plan brokered by envoy Kofi Annan meant to end the violence in Syria. The basis of the plan is a cease-fire between President Bashar Assad’s forces and rebels seeking to topple the Syrian regime. It was supposed to start on April 12 but has never really taken hold, with pockets of daily violence. The U.N. put the death toll weeks ago at more than 9,000. Hundreds have been killed since. –AP