6.0 magnitude earthquake strikes off the coast of Japan 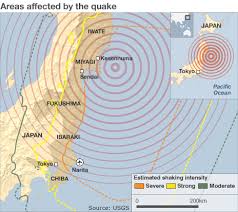 May 20, 2012 – TOKYO – Japan was hit by two shallow earthquakes in the space of just eight minutes on Sunday, one of them measuring a strong 6.0-magnitude, but there were no reports of damage and no tsunami alert. The 6.2-magnitude quake struck at 4:20pm (0720 GMT) off Japan’s northeast Pacific coast, the national meteorological agency said, followed by a tremor with a reading of 5.7 at 4:28pm. The U.S. Geological Survey estimated the magnitude of the first quake at 6.0. The depth of both quakes was about 10 kilometers, the agency said. “Sea levels may change slightly due to the (first) earthquake but there is no fear of damage resulting from it,” the agency said in a statement. A 9.0-magnitude undersea earthquake off the same coast triggered a monster tsunami on March 11 last year, leaving about 19,000 people dead or missing and crippling the Fukushima nuclear power plant. –Deccan Times

23 Responses to 6.0 magnitude earthquake strikes off the coast of Japan