Israel prepares for possible Iranian strike: Palestinian president warns an attack would be ‘the end of the world’ 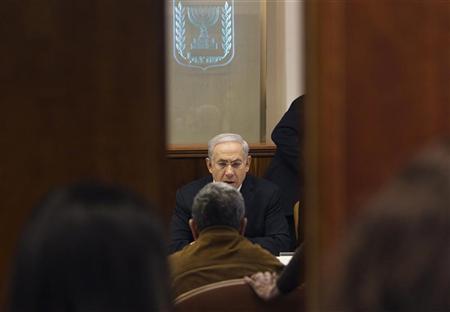 May 18, 2012 – ISRAEL – Time for that decision is fast running out and the mood in Jerusalem is hardening. Iran continues to enrich uranium in defiance of international pressure, saying it needs the fuel for its civilian nuclear program. The West is convinced that Tehran’s real objective is to build an atomic bomb – something which the Jewish state will never accept because its leaders consider a nuclear armed-Iran a threat to its very existence. Adding to the international pressure, U.S. ambassador to Israel Daniel Shapiro said this week American military plans to strike Iran were “ready” and the option was “fully available.” The central role Iran plays in Netanyahu’s deliberations is reflected in the huge map of the Middle East hanging by the door of his office. Israel lies on one edge, with Iran taking pride of place in the centre. Experts say that within a few months, much of Iran’s nuclear program will have been moved deep underground beneath the Fordow mountain, making a successful military strike much more difficult. Diplomats are divided. “I think the Iran thing is a red herring,” said one senior Western envoy. “This is 98 percent about domestic politics.” Others are less convinced. Mofaz himself refuses to speak about military action against Iran, even in the theoretical. A military veteran with almost 40 years’ operational experience, whose office in the Israeli parliament displays a poster of Israeli warplanes flying low over the Auschwitz concentration camp, he scoffs at the idea that his Iranian descent gives him special influence on an Iran attack decision. He derides the idea any serious official in the know would talk to visiting journalists about such a sensitive military subject. But behind the carefully evasive language of top officials, basic facts are clear. Time is running out. Iran’s nuclear program – regarded by Netanyahu as an existential threat to the state of Israel – will soon be buried deep enough underground to render an Israeli attack impossible. The Jewish state’s options are narrowing. “I think they’ve gone into lockdown mode now,” the senior Western diplomat said. “Whatever happens next, whatever they decide, we will not find out until it happens. I think they have made a decision to attack,” said one senior Israeli figure with close ties to the leadership. “It is going to happen. The window of opportunity is before the U.S. presidential election in November. This way they will bounce the Americans into supporting them.” Those close to Netanyahu are more cautious, saying no assumptions should be made about an attack on Iran – an attack with such potentially devastating consequences across the volatile Middle East that Palestinian President Mahmoud Abbas even went so far as to predict in an interview with Reuters last week that it would be “the end of the world.” –Reuters

72 Responses to Israel prepares for possible Iranian strike: Palestinian president warns an attack would be ‘the end of the world’