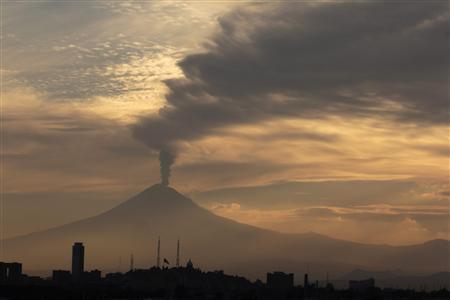 May 13, 2012 – MEXICO – Mexico’s Popocatepetl volcano spewed out huge clouds of ash and fiery rock overnight, closing a local airport on Saturday and frightening nearby villagers, already on edge after weeks of increased activity. Popocatepetl, 50 miles (80 km) southeast of Mexico City, shook with tremors that belched out four large plumes of ash on Friday night and Saturday morning, the National Center for Disaster Prevention said in a statement on Saturday. The biggest expulsion shot an ash cloud 2.5 miles (4 km) into the air and launched glowing rocks more than half a mile (1 km) from the crater, the statement said. Raul Arambula, a scientist collaborating with the government’s disaster center, said the volcano threw out the most ash and fragments of red-hot rock since authorities raised the alert level last month. “It was spectacular,” Arambula said. “Of course, it makes you worry about everyone living nearby.” In Santiago Xalitzintla, a village about 6 miles (10 km) from the volcano, the loud rumblings sent residents running to the town square during the night. “The volcano is looking serious. It was really roaring strongly last night,” said Juan Castro, 83, who said he was half-deaf but had no trouble hearing the tremors. The ash clouds forced the airport in the central state of Puebla to suspend operations on Saturday. Billowing ash earlier in the week closed the airport on Tuesday and Thursday. Civil protection officials in Mexico City said a change in wind patterns could send ash over the capital next week. Mexico’s disaster center raised the volcano’s alert level to yellow phase three from yellow phase two in mid-April, the third-highest warning on the center’s seven-step scale. There are no plans yet to evacuate nearby residents. –Reuters